On August 22, 2022, ShanghaiTech University signed a letter of intent (LOI) with Institut polytechnique de Grenoble (Grenoble INP - UGA, France) and École Nationale Supérieure de Chimie de Montpellier (ENSCM, France). Based on the LOI, ShanghaiTech and the two French institutions plan to carry out cooperation in several areas, including mutual visits of students and faculty, dual-degree programs, and a Sino-French program in the fields of low carbon and energy transition.

To celebrate the signing of the LOI, the three institutions held an online cooperation launching ceremony on December 19, 2022. Participants from ShanghaiTech included Vice President ZHU Zhiyuan, Vice President JIANG Ge, representatives from the Office of International Affairs and the Institute of Carbon Neutrality, and Assistant Professor LIU Yuxi from the Institute of Humanities (interpreter). Participants from Grenoble INP included President Pierre BENECH, Vice President of International Relations Eirini SARIGIANNIDOU, Vice President of Research and Scientific Council Valérie PERRIER, the French Dean of IFCEN Jean-Marie BOURGEOIS-DEMERSAY, and representatives from the International Development Office. Participants from ENSCM included Director Pascal DUMY, professors and representatives from the International Office. This cooperation is also supported by the French Embassy in China and the French Consulate General in Shanghai. The French Consul General in Shanghai Joan VALADOU, the Counselor for Higher Education, Research and Innovation Marc DAUMAS, the Attachée for Education Séverine BOUE and the Attaché for Science and Technology Xavier ASSFELD all participated in the ceremony. The ceremony was moderated by NIE Yan, Deputy Director of the Office of International Affairs at ShanghaiTech.

Firstly, JIANG Ge extended a warm welcome to all the guests. He introduced the international development strategy of ShanghaiTech, as well as its highly international faculty, extensive bilingual teaching and abundant overseas student exchange programs. He looks forward to working with the two French institutions to promote mutual visits, talent training and research cooperation. ZHU Zhiyuan then introduced the Institute of Carbon Neutrality, which aspires to strengthen cooperation and collaborative innovation with leading universities, research institutions and enterprises at home and abroad to help realize the carbon neutrality goals in China and the world.

Joan VALADOU said that “the taste” for science and research is something fundamental that France and China share, and that we need more than ever to face the great challenges of our time: climate change, protection of biodiversity, and the fight against major epidemics. French and Chinese universities and research institutes play a significant role in this regard. Impressed by ShanghaiTech’s achievements as a young university, he is glad that France is now one of the priority partners of ShanghaiTech and sincerely hopes that the three institutions will carry out fruitful cooperation in education and research in the fields of low carbon and energy transition.

Pierre BENECH in his speech emphasized the many similarities between ShanghaiTech and Grenoble INP in physics, information science, management and international training, and expressed his strong support for mutual visits, joint training programs and joint research. On behalf of Grenoble INP - UGA, he invites a delegation from ShanghaiTech to visit Grenoble as soon as the sanitary situation permits.

Pascal DUMY highlighted ENSCM’s mission, the ranking of its superior disciplines in chemistry and the outstanding medical resources in Montpellier, one of the oldest universities in Europe. He hopes to have extensive cooperation with ShanghaiTech in materials, chemistry and energy. He is also eager to establish face to face relationships at the soonest. 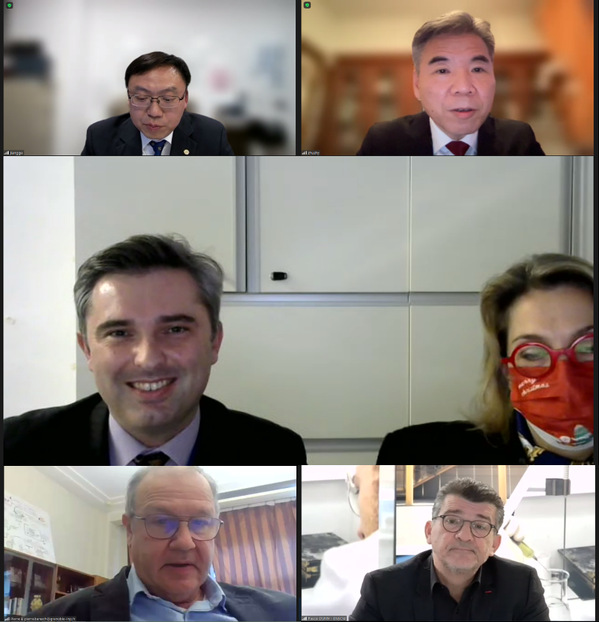 At the end, representatives of the three institutions showed the signed LOI on the screen. The cooperation launching ceremony was successfully concluded with applause of all participants. 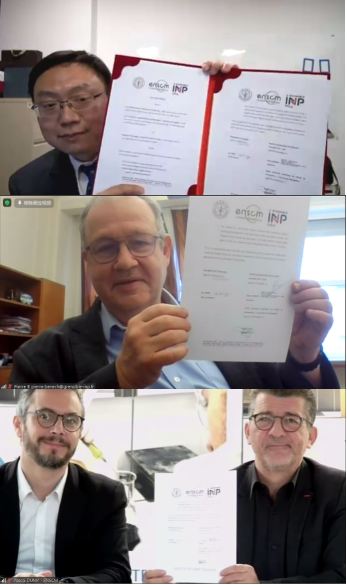 All three institutions expressed their strong wish to initiate in-person visits as soon as possible. 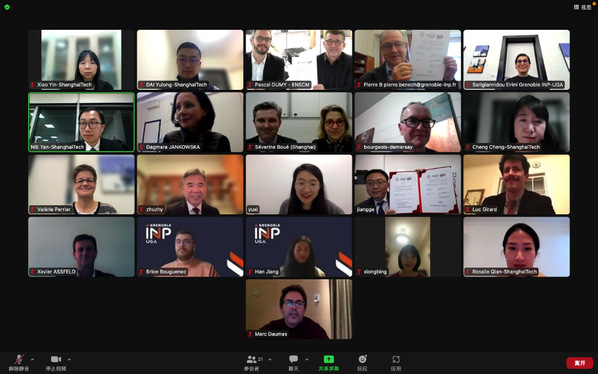