Osteosarcoma is the most common primary malignant tumor of bone, mostly seen in children and adolescents. Comprehensive treatment options for osteosarcoma have not evolved significantly in the last 30 years, and there is an urgent need to explore new therapies.

In this study, the researchers attempted to activate immune cells in the tumor microenvironment to treat osteosarcoma. The metal element manganese has shown great potential for immunotherapy by activating NK cells (natural killer cells) and dendritic cells. Meanwhile, macrophages are the most abundant type of immune cells in the tumor microenvironment of osteosarcoma and are closely correlated with the growth and metastasis of osteosarcoma, but the effect of manganese on macrophages is still unknown.

The research team proposed that Mn-containing nanoparticles may enter cells and react with intracellular glutathione to release manganese ions, which generate large amounts of reactive oxygen species through Fenton-like reactions and activate NF-κB signaling pathways to promote inflammatory responses in macrophages. This study reveals a novel immunotherapeutic function of manganese and demonstrates that macrophages are one of the key targets for osteosarcoma treatment, laying a foundation for the development of new therapies. 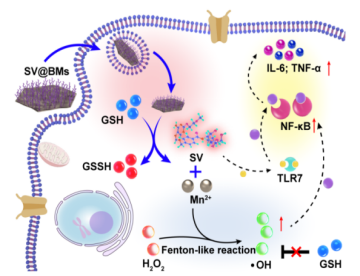 **The news article is provided by Prof. Zhang Yifeng