In November, Life Dean's Lecture of ShanghaiTech came again as scheduled. The Life Dean's Lecture is a special edition of the SLST Seminar held once a year, where distinguished experts in life sciences are invited to share the frontier scientific advances with faculty and students. This year, James Rothman, winner of the 2013 Nobel Prize in Physiology or Medicine and Distinguished Adjunct Professor of SLST, was invited to deliver a talk on the mechanism of neurotransmitter release at synapses. Liu Ji-Long, Deputy Dean of SLST, hosted the lecture.

James Rothman shared the 2013 Nobel Prize in Physiology or Medicine with Randy Schekman and Thomas Südhof for their discoveries of machinery regulating vesicle traffic, a major intracellular transport system in our cells. The topic of his talk is "The Mechanism of Neurotransmitter Release at Synapses". Neurotransmitters are chemical substances that transmit information between neurons or between neurons and effector cells, and key signaling molecules of the nervous system. The sub-millisecond release rate of neurotransmitters determines the speed of brain in information processing and represents a physicochemical limit of evolution. In his talk, Professor Rothman explained the critical physical principle of the mechanism of neurotransmitter release, and introduced the latest research advances in the field. 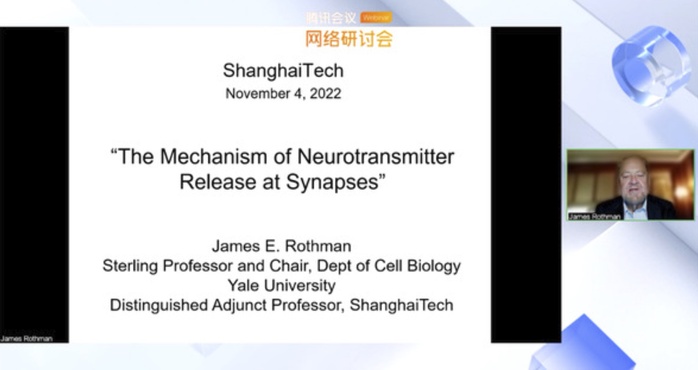 This lecture was warmly received by audiences inside and outside ShanghaiTech, with nearly 1,300 views and 2,500 likes. Following an interactive Q&A session, Professor Rothman addressed the ShanghaiTech students, “the greatest discovery ever made is the scientific method itself - it has endless potential.”