Rich and tunable physical properties could emerge from the moiré superlattice constructed from two-dimensional multilayers. The magic-angle twisted bilayer graphene (MATBG) is one of the most distinguished examples, which exhibits unconventional superconductivity, correlated physics, ferromagnetism, and nontrivial topology far beyond monolayer graphene. Recently, magic-angle twisted trilayer graphene (MATTG) has shown robust superconductivity similar to MATBG and other unique properties, including the Pauli-limit violating and re-entrant superconductivity. Hence, the study on the novel electronic structure of MATTG could not only serve as a stepstone for further understanding of unconventional superconductivity, but also provide a potential material platform for efficient quantum electronics.

Magic-angle twisted graphene systems create a vibrant field in condensed matter physics, and also bring great challenges to experimental techniques. The devices are of micron sizes fabricated by the mechanic exfoliation method, which requires precise control of the positions and twisted angles of the graphene layers. The device fabrication and systematic investigation of the electronic structure ask for efforts from different research groups and platforms. With collaboration between ShanghaiTech University and Shanghai Synchrotron Radiation Facility (SSRF), it took Chen Yulin and Liu Zhongkai’s group six years to build the first nano-scale angle-resolved photoemission spectroscopy (nano-ARPES) endstation in China which has been fully operational in SSRF since 2021. The research group is affiliated to the Laboratory for Topological Physics (LTP) of SPST. The nano-ARPES facility provides a powerful experimental technique to study the electronic structures of samples and devices of extremely small sizes.

With the advanced sub-micron spatial resolution of nano-ARPES, the research team managed to resolve the monolayer, bilayer, and MATTG areas of the devices. Fine measurements of the MATTG region have presented the first experimental evidence on the coexisting Dirac bands and moiré flat bands in the momentum space, consistent with first-principles calculations. Scanning tunneling microscopy/spectroscopy (STM/STS) measurements show clear moiré periodicity and the real space localization of the flat bands, which corresponds to the extension in the momentum space linked by the uncertainty principle. This study provides exemplified research and important advances in the electronic structures of moiré superlattices. 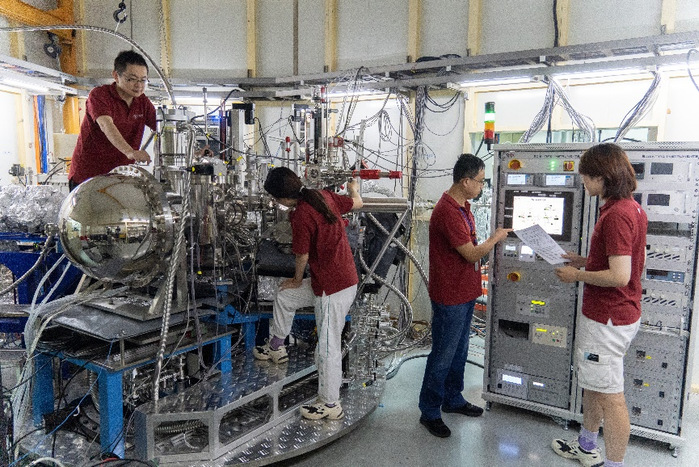 Prof. Liu Zhongkai (the first from the left) and his group members conducting experiments with the help of nano-ARPES

*This news article was provided by Prof. Liu Zhongkai