In recent years, the development and application of gene editing technology mediated by CRISPR/Cas9 (clustered regularly interspaced short palindromic repeats-associated peptide 9) and its derivatives has attracted worldwide attention. A variety of gene editing tools relying on the homologous recombination (HR) pathway have been able to achieve precise DNA insertion or gene deletion, which not only promotes basic research in biomedicine, but also brings huge clinical application prospects for the treatment of various genetic diseases. However, the insertion precision or deletion efficiency of long DNA fragments (especially more than 10,000 DNA base pairs) in mammalian cells is very low, which seriously blocks the application of CRISRP in large fragment gene editing.

Recently, a simple and efficient gene editing tool termed TEd (transcription-coupled Cas9-mediated editing) has been developed by the SLST scientists, whereby intracellular efficient editing of large DNA fragments can be achieved, through the process in which HR is promoted to occur by introducing transcription process on canonical HR-donor to change the structural state of the donor chromatin during DNA repair. The studies was led by SLST Gao Guanjun’s group, and their results was published in Nucleic Acids Research.

Gao's team has long been engaged in developing gene editing technology. Their early studies tried to fuse and express Cas9 nuclease and reverse transcriptase (RT) in cells, by providing promoters on the HR-donor to transcribe RNA molecules complementary to homologous DNA. However, this kind of RT-dependent method is very inefficient for large fragment gene knock-in. During the research, Gao’s team accidentally discovered that the HR-donor in the transcriptional state can significantly promote HR repair. Based on this, the team proposed their method to artificially introduce the transcription process to change the chromatin structural state of the donor and acceptor during the DNA repair, so as to verify whether changes in the structural state of the HR-donor can improve the insertion and deletion efficiency of large DNA fragments.

In the TEd system, promoters are introduced on the homologous donor plasmid to form a transcription-coupled HR-donor, multiple bacteriophage MS2 (MS2) stem-loop structures are added to the 3’end of transcription-coupled RNA (TC RNA), and the MS2 coated protein (MCP) is fused with Cas9. It has been verified that the editing efficiency of the TEd system in several mammalian test cells is about 10 times higher than that of the traditional CRISPR/Cas9-mediated editing method (CEd). The TEd system not only solves the problem of low efficiency of traditional gene editing methods, but also provides a good foundation for exploring DNA recombination repair mechanisms at the epigenetic level. 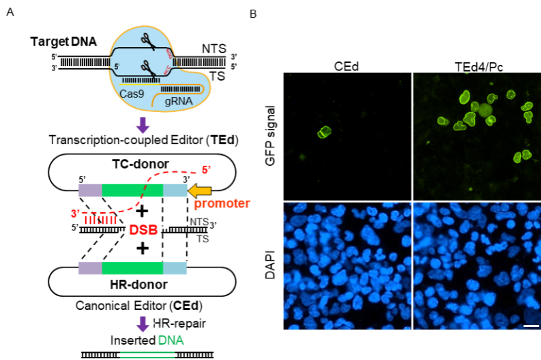 A. Difference between TEd and CEd.

B. Cells that used with the TEd tool can be observed to have more green fluorescent protein (GFP) tags around the nuclear membrane than those used with the CEd tool, indicating that the TEd system can insert the GFP tags at the target site more efficiently.