BLM, as one of the critical RecQ family helicases, is involved in many aspects of genome stability maintenance. The overexpression of BLM found in multiple cancer tissues, such as breast cancer and lymphoma, is believed to be closely related to genomic instability. However, the molecular mechanism underlying the genome instability and increased cancer incidence associated with BLM overexpression remains largely unknown.

In this research, by using fluorescent optical tweezers, the researchers found that BLM under high concentration can compress newly-generated ssDNA and form co-condensates after double-stranded DNA (dsDNA) unwinding (Figure A). With the introduction of ATP, the capability of BLM to condense on ssDNA is potentiated, which further promotes the compression of ssDNA against a resistive force of up to 60 piconewtons. Moreover, the researchers provided direct evidence that BLM can compress ssDNA by first dismantling ssDNA-bound RPA or RAD51 proteins (Figure B).They further demonstrate that ssDNA co-phase separates with BLM and promotes the formation of dynamically arrested co-condensates of ssDNA and BLM with apparent decreasing reversibility. 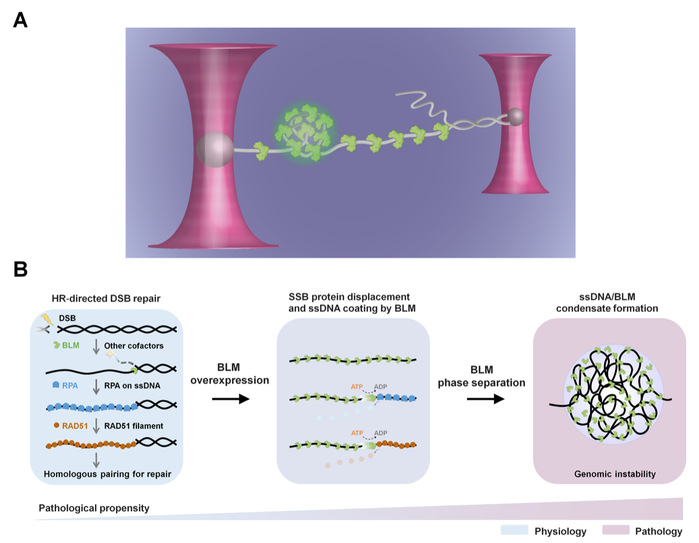 (A) BLM helicase compresses ssDNA generated from dsDNA unwinding. (B) Model of the genomic instability caused by overexpressed BLM interfering with homologous recombination via ssDNA compression and co-condensation.

These findings identify an unexpected characteristic of a DNA helicase and provide a new angle of protein/ssDNA co-condensation for understanding the genomic instability caused by BLM overexpression under diseased conditions.