A new approach to modulate thermal relaxation rate of photoswitches

Photoswitches are a class of molecules that can change their structural geometry after light exposure, and have wide applications in light-responsive materials, ion transport, and biomedicine. The speed at which the photoswitch changes structural geometry (i.e. thermal relaxation rate) is an important factor that determines its application scenarios, so the regulation of this performance is of great significance for the application of photoswitches. Recently, SPST Qiao Bo’s research group proposed a method to directly control the thermal relaxation rate of indigo molecular photoswitches without chemical modification and non-covalent interactions. The results were published in ChemPhotoChem, a well-known journal in the field of photochemistry, and became the cover feature article of the month.

Carbon-carbon double bonds (C=C) are widely found in various organic compounds. When the two ends of the double bond carry different substituent groups, two different stereoisomers (E and Z, as shown in Figure 1) can be formed. In most cases, only one isomer is stable, while the other isomer is in a “metastable state”. As for the steady-state isomers, they can be temporarily converted to metastable isomers only after being excited by a specific wavelength of light. This is the principle that molecular photoswitch uses and acts as a kind of “molecular machine” to switch itself between two different states.

Chemical modification and introduction of substituent groups are common methods to control the thermal relaxation rate. Substituents can both change the electronic structure of the molecule and introduce additional intramolecular hydrogen bonds, thus effectively tuning the thermal relaxation time of the photoswitch. However, such methods have certain limitations, including cumbersome synthesis steps, limited control precision, and one chemical group only corresponds to a single rate.

In Qiao Bo’s research, his master student Shen Zhennan found that the addition of metal salt (i.e. metal cations like Li+, Na+, etc.) into the solution of the indigo molecular photoswitch can slow down the rate at which the molecule in the Z state transitions back to the E state, reducing the thermal relaxation time of the indigo molecule from about 4 minutes to about half an hour (Figure 3). Shen Zhennan also found that by changing the concentration of added metal cations, the thermal relaxation time of the indigo photoswitch can be precisely adjusted within the above time interval. 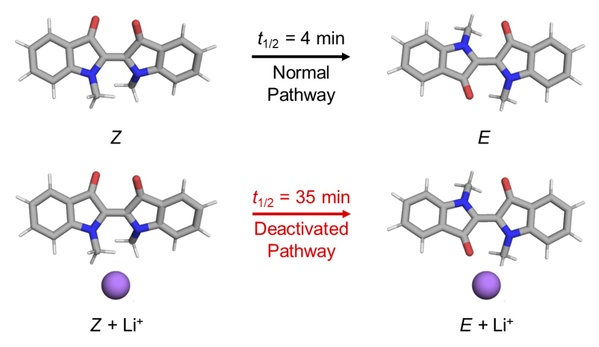 Through further experiments and theoretical calculation analysis, the researchers found that this effect brought by introduced cations is due to the non-covalent interaction between the metal cation and the indigo molecule (Figure 4), which stabilizes the structure of indigo molecule in the Z state (metastable state), resulting in a slower rate of isomerization. Based on the above conclusions, the researchers envisage that similar methods can also be extended to other types of molecular photoswitches: by adding small molecules or ions to form non-covalent interactions with the main molecule of the photoswitch, and then stabilize the molecules in metastable state to realize the modulation of their thermal relaxation rate. 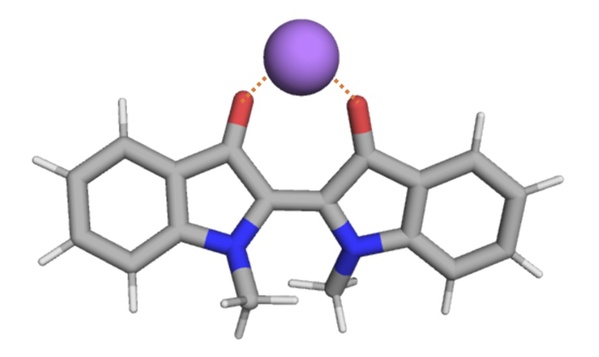 Figure 4. The non-covalent interactions between metal cations and indigo molecules

The advantage of this method proposed by Qiao Bo’s group is that the thermal relaxation rate can be regulated without changing the structure of the molecular photoswitch, so that the photoswitch can retain its original function and property. “Thinking about the molecular photoswitch as a timer, the traditional method is similar to creating a timer for each timing period,” says Shen Zhennan when talking about this achievement. “And our new method is equivalent to winding the timer, making it adaptable to different timings.”

Shen Zhennan is a second year master student and is also the first author of the paper. Assistant Professor Qiao Bo is the corresponding author, and ShanghaiTech University is the first completion unit.