In the quest for understanding how the mammary gland epithelium forms its distinctive branching pattern, a team led by SLST researchers found that it uses a completely different system than what was previously believed

Branching morphogenesis, the process by which cells or tissues form branches, is essential for the formation of various invertebrate and vertebrate organs. By packing a large surface area into a small volume, it allows efficient exchange of gases, nutrients, metabolites and wastes between organisms and their environments, thus making possible the emergence of the metazoan during evolution. At present, the understanding  is that branching starts when cells at the branching-point migrate outward and directional migration is not only required, but also determines the pattern of the branching network. This surprising finding by Lyu’s group thus sheds important new light on the distinctive mechanisms employed by invertebrate and vertebrate systems and calls for additional future efforts to better understand the novel mechanism.

The findings were fortuitous as the scientists started out to examine whether the polarity gene Lgl1 indeed determines epithelial polarity in the mammary gland as it does in invertebrate organs. Interestingly, they found that mammary epithelium lacking Lgl1 is unable to migrate but otherwise shows normal polarity, suggesting that other genes may cooperate with Lgl1 in maintaining polarity and thus are able to compensate for its loss. In subsequent studies, they show that LGL1 can bind to Integrin β1 signaling pathway thus controlling directional migration. 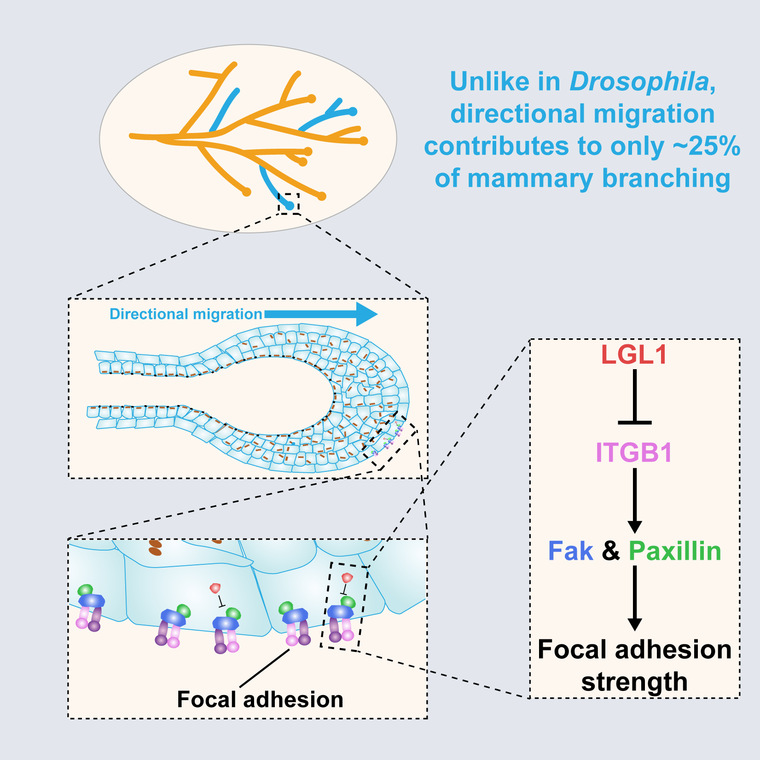