Food is one of the most important resources for the growth and development of all animals including humans. Along with other key factors, such as water and air, food is often the rate-limiting factor that determines the expansion and decay of the animal population, due to its relative scarcity in the environment. For this reason, animals have evolved a powerful nutrition-sensing system to correspondingly regulate their growth speed and metabolism and even the developmental fate (such as development/diapause, individual size, life span, etc.), according to the environmental nutrition availability. In recent years, biochemists have used mammalian tissue in culturing cell systems to reveal a series of nutrient-sensing signaling pathways (such as mTOR, insulin, AMPK, etc.) and related detailed molecular mechanisms that elucidate how cells sense amino acids, glucose, or other key nutritional molecules. It is implied  that in addition to providing material energy for life, nutrient molecules may also be used as signal molecules to participate in the growth and metabolism of cells. Unfortunately, it is currently difficult to verify such an idea in vivo, because unlike tissue culture cells, lacking key nutrient molecules from food usually leads to rapid death of animals, so it is impossible to test whether food acts as a signaling molecule to regulate the growth and development in animals.

By using the nematode C. elegans model, Assistant Professor Zhu Huanhu's research group from SLST found that a kind of fatty acid which is rich in beef and dairy products named monomethyl branched-chain fatty acids (mmBCFAs), can be used as a key nutrition signal via its downstream sphingolipid metabolite and mTOR pathways to affect animals’ perception of the abundance of total amino acids in the food and determine their developmental fate. On October 12, they published their research results in a paper entitled Monomethyl branched-chain fatty acid mediates amino acid sensing by mTORC1 in Developmental Cell. In their study employing Caenorhabditis elegans, which can survive for a long period under insufficient food conditions, researchers cultivated the nematodes under a severe dietary restricted condition to force them to enter a reversible diapause status at the L3 larval stage. Then they added various important nutrients into the food to observe whether they could deceive the nematode's judgment on nutrition, and were surprised to find that neither carbohydrates nor amino acids could deceive nematodes to quit the diapause status. However, a saturated branched-chain fatty acid (BCFA) with a methyl group at the end of the carbon chain named mmBCFAs could “persuade” the nematodes to emerge from their protective diapause status and they died eventually. Further studies found that nematodes entered the diapause because of the lack of total amino acids in the food, while the addition of mmBCFAs led the nematodes to mistakenly believe that the amino acids were sufficient, which led to their quitting the diapause and encountering their unfortunate death fate. 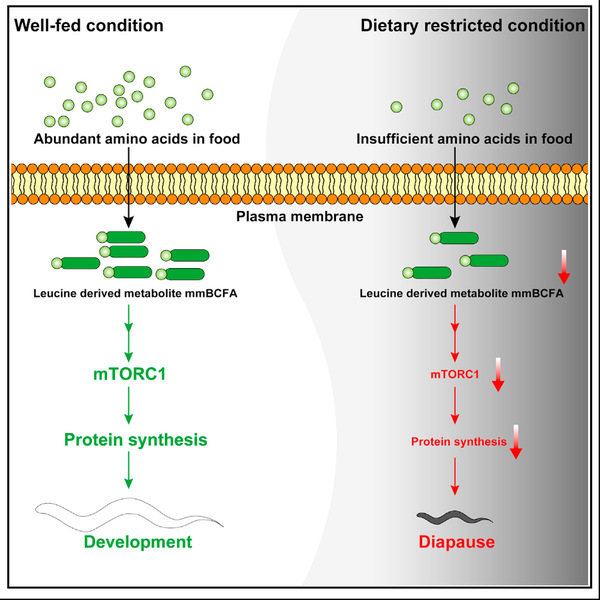 Why do animals choose to use mmBCFAs to evaluate the total amino acids level during evolution? Zhu’s group found that mmBCFAs are enriched among several food bacteria/intestinal bacteria of nematodes in nature. These data suggest that nematodes and other animals have cleverly used mmBCFAs, a metabolite converted from branched-chain amino acids by bacteria, as their own criteria for evaluating the abundance of amino acids. Given that the human gut bacteria also contain a large amount of mmBCFAs, it would be an intriguing question as to whether we can also use mmBCFAs to judge our nutritional status.