Sad tears from a lady can inhibit sexual impulse of a man. Why and how? Clues can be found from a recent study led by Professor Tong Xiajing at SLST. She and colleagues published a research article in the journal eLife entitled, “Male pheromones modulate synaptic transmission at the C. elegans neuromuscular junction in a sexually dimorphic manner. This study reveals how the male pheromone environment modulates neurodevelopment and synaptic transmission in a sex-specific manner.

The team further discovered that male-specific pheromones mediate the synaptic transmission modulation effect. By dissecting sensory circuits in the worm, they discovered that AWB chemosensory neurons (similar to olfactory neurons in human) sense those male pheromones and then transduce information to the NMJ. While the AWB neurons are shared by both sexes, the male pheromones only excite AWBs in the hermaphrodites, but not in the males.

These findings by Professor Tong and colleagues demonstrate a cellular and circuit mechanism for synaptic modulation and behavioral flexibility by sexual dimorphic pheromones. This work was supported by the Science and Technology Commission of Shanghai Municipality and National Natural Science Foundation of China. 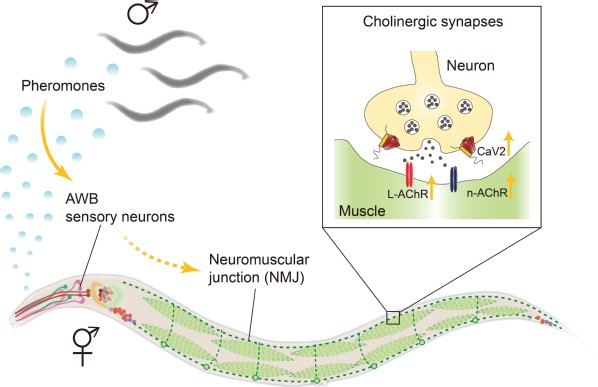