Collective migration is a group or a cluster of cells that cooperate and coordinate their movements. In recent years, it has been proved that collective migration is an important process in the life activities of the multicellular organisms, but its cellular and molecular biological mechanism is still poorly understood. Although migration of single cells is traditionally the most studied and best understood, recent advances have highlighted the importance of collective migration, which is a fundamental cell and developmental biological process, essential for embryogenesis, wound repair, and cancer metastasis. For instance, the latest research shows that cancer metastases, previously thought to migrate as individual cells, are in fact more effective at invasion during collective migration. Therefore, it is very important to study the cellular and molecular mechanisms of collective migration as they have a profound impact on the development of embryos, organogenesis, various pathological behaviors, and the treatment of cancer.

No matter whether single or multicellular, in cell migration, there are two fundamental questions: first, how to determine the migration direction? Second, where does the driving force come from? In all the current collective models, including the monolayer of epithelial sheet cells in the 2D wound-healing assay, vascular sprouting and cancer invading, etc, these two questions are determined by the choice of “leader cells”. Directionality or front-rear polarity is set up when leader cells have been established, often as a fate choice. Once determined, leader cells are also the drivers responsible for pulling the collective toward migratory cues.

Despite some recent advances in the study of collective migration, little is understood regarding the mechanism by which vertebrate glandular epithelium undergoes directional migration. Based on Lu Pengfei group’s previous report that FGF10 can trigger directional epithelial migration, they can answer those two fundamental questions. The group found that mammary epithelium uses a novel mechanism both to set up directionality and to drive migration. Specifically, the front-rear polarity of mammary epithelium is established by asymmetric cell proliferation and epithelial stratification in an FGF10-gradient-dependent manner. Unlike all other known systems, “leader cells” have not been generated at this stage. Epithelial stratification in the front, which leads to tissue polarity loss, is required for directional migration. Lu Pengfei's group have shown that front cells are leader cells of directional migration and they move faster and more directionally. Compared to other collective systems, “leader cells” in the mammary epithelium are a dynamic rather than a stable population. The FGF10 gradient orients intra-epithelial protrusions toward the signal source so that the overall cell movements are cohesive and efficient. Finally, they show that instead of using a pulling force as in other collective models, “leader cells” power migration by a combination of both pulling and pushing forces. This work has opened a door to various new and exciting frontiers. It also provides a theoretical basis for understanding cancer metastasis, such as in the development of breast cancer, and provides insight into finding new therapeutic targets.

Professor Lu Pengfei is the corresponding author of this study. This work was supported by grants from the Ministry of Science and Technology of China, National Science Foundation of China, and startup funds from ShanghaiTech University. 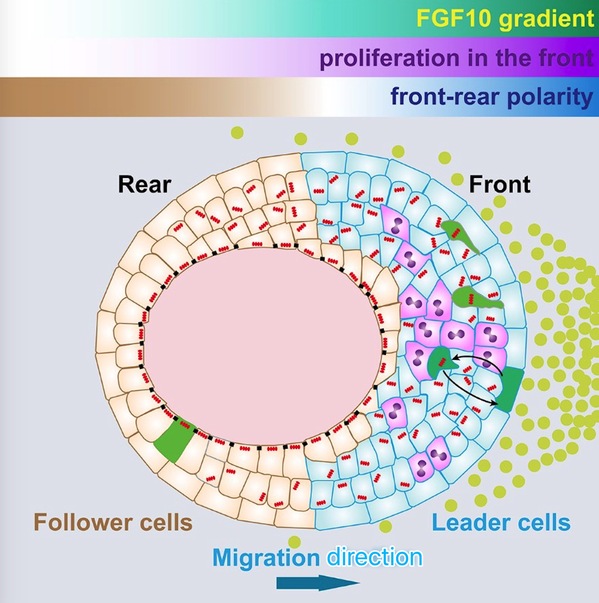 Figure 1: The process of the epithelial cell collective migration. The “front-rear” polarity of mammary epithelium is established by asymmetric cell proliferation and epithelial stratification in an FGF10-gradient-dependent manner. Epithelial stratification in the front, which leads to tissue polarity loss, is required for directional migration. “Leader cells” in the mammary epithelium are a dynamic rather than a stable population. FGF10 gradient orients intra-epithelial protrusions toward the signal source so that the overall cell movements are cohesive and efficient.