Discovery of Common Activation Mechanism for Class A GPCRs 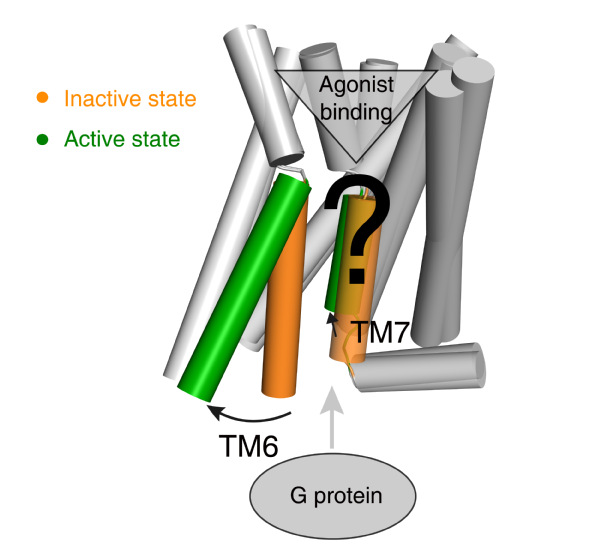 Using a residue-residue contact score (RRCS)-based framework, Professor Zhao and colleagues quantified the global, local, major and subtle conformational changes in a systematic way (i.e., inter-helical and intra-helical, switching and repacking contacts). By analyzing the conformational changes in 234 structures from 45 class A GPCRs, they discovered a common GPCR activation pathway comprising of 34 residue pairs and 35 residues (Fig. 2). The pathway unifies previous findings into a common activation mechanism and strings together the scattered key motifs such as CWxP, DRY, Na+ pocket, NPxxY and PIF, thereby directly linking the bottom of ligand-binding pocket with G protein coupling region. Collectively, the intra-helical/inter-helical and switching/repacking contacts between residues is not only critical to reveal the continuous and modular nature of the activation pathway, but also to link residue-level changes to transmembrane helix-level changes in the receptor. 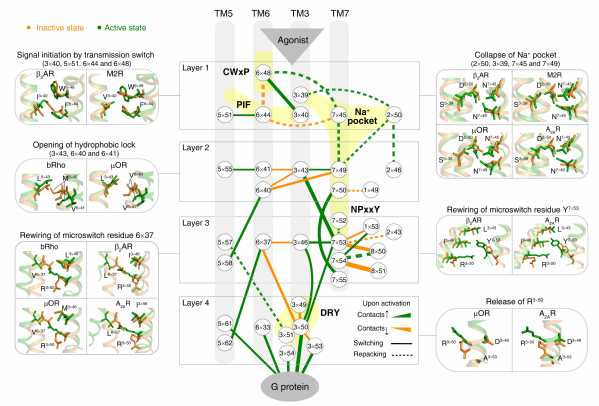 Site-directed mutagenesis experiments support this observation and reveal that rational mutations of residues in this pathway can be used to obtain receptors that are constitutively active or inactive. The common activation pathway provides the mechanistic interpretation of constitutively activating, inactivating and disease mutations. As a module responsible for activation, the common pathway allows for decoupling of the evolution of the ligand binding site and G protein binding region. The researchers suggest that “such an architecture might have facilitated GPCRs to emerge as a highly successful family of proteins for signal transduction in nature.”