The Magnolia Golden Award has been awarded annually since 1993, and was established to recognize foreign experts and partners for their outstanding contributions to Shanghai's economic and social development. The 2019 Magnolia Golden Award was given to 12 distinguished foreigners working on industry and academia from Italy, UK, France, Japan, Germany, Denmark, the US and Singapore.

In November of 2012, Dr. Stevens founded ShanghaiTech’s iHuman Institute together with Professor Liu Zhijie. The institute is focused on integrating data across different spatial and temporal scales to build an atomic resolution model of the human body in order to better understand disease and develop better and safer next generation medicines. Under the impetus of Dr. Stevens, the institute has gathered a group of domestic and international scientists and researchers who are engaged in signal transduction of human cells and cross-scale biomedical imaging research. Over the past three years, the Institute has published a number of papers in top international academic journals, including three in Cell and three in Nature. This is not Dr. Stevens’ first time to receive the Magnolia Award. In 2017, he was honored with a Magnolia Silver Award for his contributions. 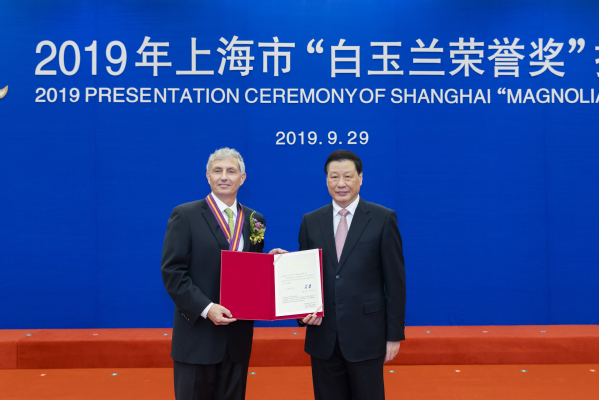