On September 3, 2019, Dr. Christopher S. Yoo, John H. Chestnut Professor of Law from University of Pennsylvania, visited ShanghaiTech University and gave a public lecture on “Innovation and the Law.”

Professor Yoo  introduced his unique career path starting from his days as an undergraduate physics major at Harvard who later earned a degree in Social Studies, an MBA from UCLA, and JD from Northwestern. After working for U.S. Senate and in private sector, he clerked for courts and practiced as a lawyer. Eventually he became a professor whose primary appointment is in the Law School and secondary appointments in Computer Science and Communications.

Professor Yoo briefly introduced the innovative integrated interdisciplinary joint degree programs he has developed at UPenn to produce a new generation of professionals with advanced training in both law and engineering. He then shared with the audience his research interests in a wide range of innovative interdisciplinary research, including big data and competition, algowatch (algorithmic bias), empirical studies of connecting people and the Internet, modularity theory/open source and regulation/competition, lowering legal barriers to RPKI adoption, privacy and security for cyber-physical systems, protection of IP & confidential information in regulatory processes.

After the lecture, Professor Yoo held a dialogue session with faculty members and met with deans and directors from School of Entrepreneurship and Management (SEM), School of Information Science and Technology (SIST), Shanghai Institute for Advanced Immunochemical Studies (SIAIS), Office of Research, and Office of Technology Transfer.  He also visited labs at SEM and SIST.

Professor Yoo is Director of Center for Technology, Innovation & Competition, University of Pennsylvania. He has emerged as one of the leading US authorities on law and technology. Having authored more than 100 scholarly works, he is recognized as one of the most cited scholars in administrative and regulatory law as well as intellectual property. 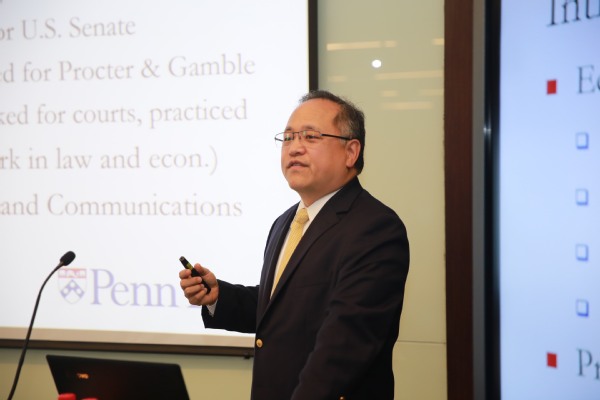