When the Intergovernmental Panel on Climate Change came out with their Special Report on Climate Change in October 2018, media attention focused on the short amount of time left to cut emissions before the 1.5-degree threshold that the signatory nations of the Paris Climate Change Agreement committed to is passed. At ShanghaiTech, School of Physical Science and Technology Professor Lin Bolin and then graduating senior Chen Anqi felt validated. Their research on carbon dioxide mitigation strategies, published six months earlier in Joule, a sister journal to Cell, had found similar results.

“Our research offers a guideline for researchers and policy makers for carbon dioxide mitigation,” explains Chen, now a PhD student at SPST. “Through the analysis of data provided by the International Energy Agency and IPCC, we predict that after about 20 years, the remaining carbon budget to meet a 2-degree temperature control target would run out given the current emission rate. We found that the use of fossil fuels to drive carbon dioxide conversion is feasible for carbon dioxide mitigation under certain conditions.”

Chen says reading the IPCC report made her proud. “I am glad they published similar findings. This will make people more aware of the urgency.” When Chen’s classmates discuss climate change in conversation or in their elective classes, she is able to share with them the research that she is doing and what it means. 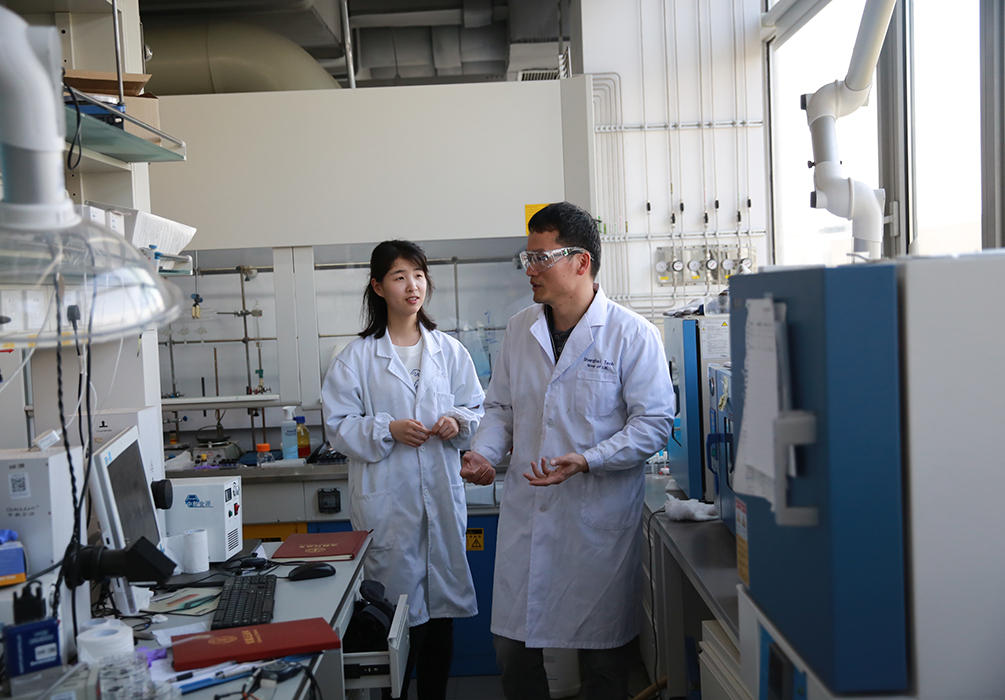 Throughout the world, the societal impacts of climate change and global warming are being felt daily. For climate researchers and those concerned with the future of the planet, it is easy to connect the dots between societal problems plaguing the world and the climate changes happening to the planet because of people’s actions.

At ShanghaiTech, researchers in the School of Physical Science and Technology are facing this challenge by delving into climate change and renewable energy research. From tackling traditional energy sources to developing renewable resources, these researchers are doing their best to raise awareness about the facts of climate change and what we can do to lessen its impact on our planet.

Chen says the research she is doing with Professor Lin has led to a greater understanding of climate change. “I found the issue of global warming is more serious than I thought. I hope that publishing this research we can make more researchers and scientists more aware of this issue,” she says. “Although most of the countries have signed the Paris Agreement and governments are promising to take action to tackle the issue, it is not enough to meet the final target.

Professor Lin says a sense of personal responsibility drives his research. “My PhD work was in the petrochemical industry,” he explains. “From that experience, I slowly learned the downside of the petrochemical industry. So that’s why I thought we have to change the situation and go all the way back to CO2 and solve the energy problem. We have to go to the root of the problem which is CO2.” At SPST, he says, “We are trying to develop technologies to reduce CO2 emissions substantially. Hopefully we can contribute some game-changing strategies for global warming campaign so we can do something really dramatic.”

Professor Ning Zhijun’s research is on solar energy. “We are trying to develop new materials to increase efficiency of solar cells reduce the cost to make it more affordable for everybody,” he says. He studied chemistry and synthesizing materials for solar cells in his PhD and now is continuing work on solar energy. “We trying to use renewable so we don’t have to use traditional fuels. Now my team is working on synthesizing highly efficient materials andbuild new device structures for highly efficient solar cells. The cost is still high for conventional solar cells,” he says, of his main challenge. “The central goal is to increase efficiency further and also reduce the toxicity of solar panels. The sun is a huge resource. If we can use solar energy very efficiently than we won’t need any other resource from traditional fuels.” 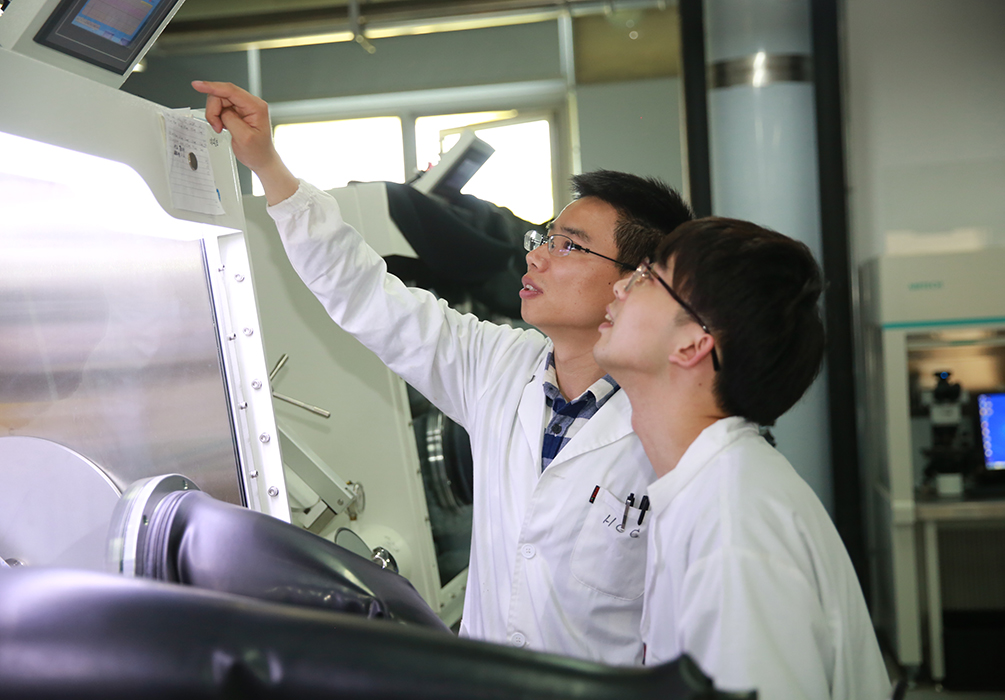 Professor Li Zhi’s research is on developing renewable feedstocks for the chemical industry. “Currently most chemical feedstocks in industry are derived from petroleum, which is not sustainable. We’re researching renewable feedstocks such as biomass to reduce petroleum usage as a long-term goal. I know this is very tough, but the richness of biomass as chemical resources and potential impact of such research – lower CO2 emission and higher sustainability - are very appealing.” Li began his work on biomass research during his post-doc.“At that time, the renewable feedstocks research was very popular because oil price was high and shale gas was not available in large scale. My professor was a grandmaster in catalysis and he thought catalysis could be used to transform renewables, it’s just that people have just started working on that so there a lot of new problems to solve. He asked me to work on this with him. It related to my previous experience and I thought it was interesting so I joined.”

The researchers are motivated not just by their interest in their research but the impact it could have on the planet. “Global warming is the biggest challenge for the entire human race but the problem is that most people do not understand the problem properly. The most important thing we have done so far is to do rigorous research to change people’s attitudes towards global warming,” says Lin. “But society is not ready yet to face the issue. Hopefully they will change their attitudes soon.”

“I’m still optimistic on the technical advances. It must lead people to the right direction,” says Li, who teaches a green chemistry course at ShanghaiTech and is trying to encourage more students to delve into research of renewable resources. “You can’t force people to go that way, but technology will lead people that way.” 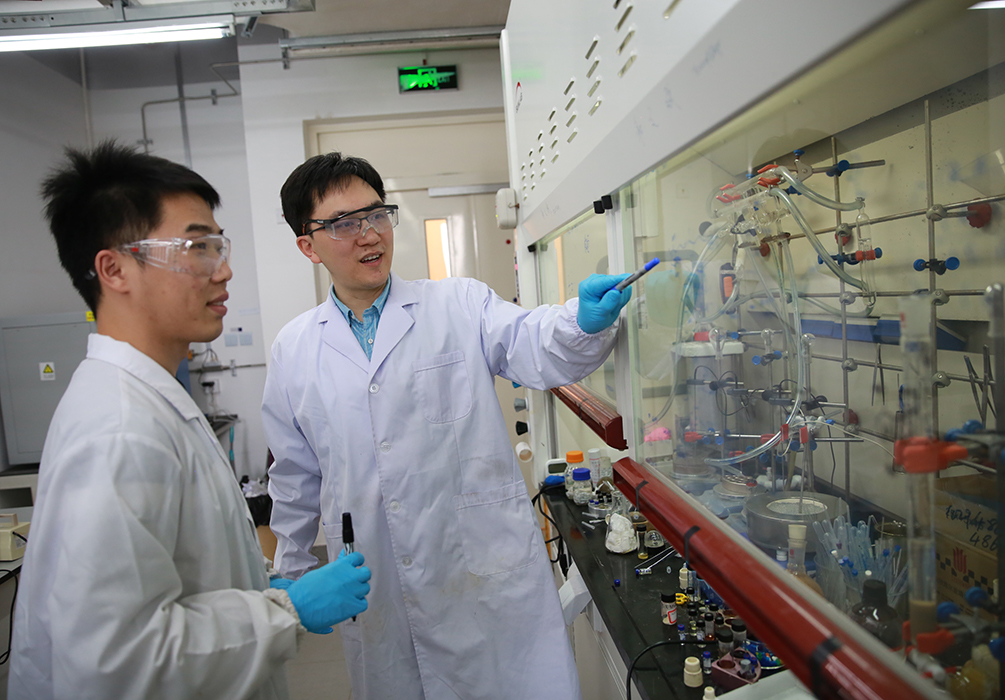 Lin says, “Scientists and engineers can only do their work, they can’t change people’s minds.” We can develop solutions, but the bottom line is that entire human beings must pay economic cost to solve this. We see the problem and we think it is very bad, but there are so many obstacles to go in the right direction.” He adds, I think everyone needs to think about what they themselves can do, every individual action can play a part. But if we want to fully solve the issue we need to do much more beyond that.”

Li adds, “I think personal actions won’t be so effective, because there’s just a small piece of it and some cannot afford alternatives.” Both Li and Lin recall a speech given by Steven Chu, who said that the people who will suffer the most from global warming are the most innocent. “It’s a big social problem,” Lin adds. The researchers say China is doing a good job of embracing renewable energy. The problem, Lin says, is the inertia of traditional energy.

With the future of our planet at such risk, it would be easy to give up hope. Li says what keeps him motivated is new problems to solve and doing chemistry he enjoys.

Ning is optimistic. He says, “The technology is growing well. From technology point of view, the science community can provide better solutions to energy problems. That’s what we can do. As a professor in university, we can also tell students to change their style of live, reduce energy they use and live a more economic life. From the policy point of view, we still need to increase our voice to get government to pay more attention to renewable energy resource.”

Chen says she remains hopeful too. “I think there are a lot of things that we can do. Even if the time is so limited and the opportunities are passing by very soon I still think we can actually do something.”

As for Lin, “I guess I’m too stubborn,” he explains, with a laugh.  “Life is very short, sometimes you need to stick to your personal values.” Besides, he adds, “I have two kids, it’s important to keep some hope for them in the future.”