On January 25th, iHuman Institute and Shanghai Institute for Advances in Immochemical Science (SIAIS) held a joint press conference to announce the simultaneous publishing of two important research studies in the same issue of the prestigious Cell journal. Having two research studies in the same issue of a journal is rare, said Distinguished Adjunct Professor Rao Zihe, one of the co-corresponding authors. Founding iHuman Director Ray Stevens emphasised that teamwork and collaboration is an important value for both iHuman and SIAIS research. The two institutes are located in the same building and frequently carry out cross-disciplinary collaboration. The first authors of the two studies both are PhD students in the first class jointly cultivated by ShanghaiTech and Chinese Academy of Sciences. The two research studies share an interesting commonality, explained iHuman Institute Executive Director Liu Zhijie. Rimonabant, an antagonist for human cannabinoid receptor CB1, which an iHuman Institute team had published the structure of in Cell before, was also found to be an inhibitor of MmpL3, a mycobacterial protein that was the subject of the SIAIS study. 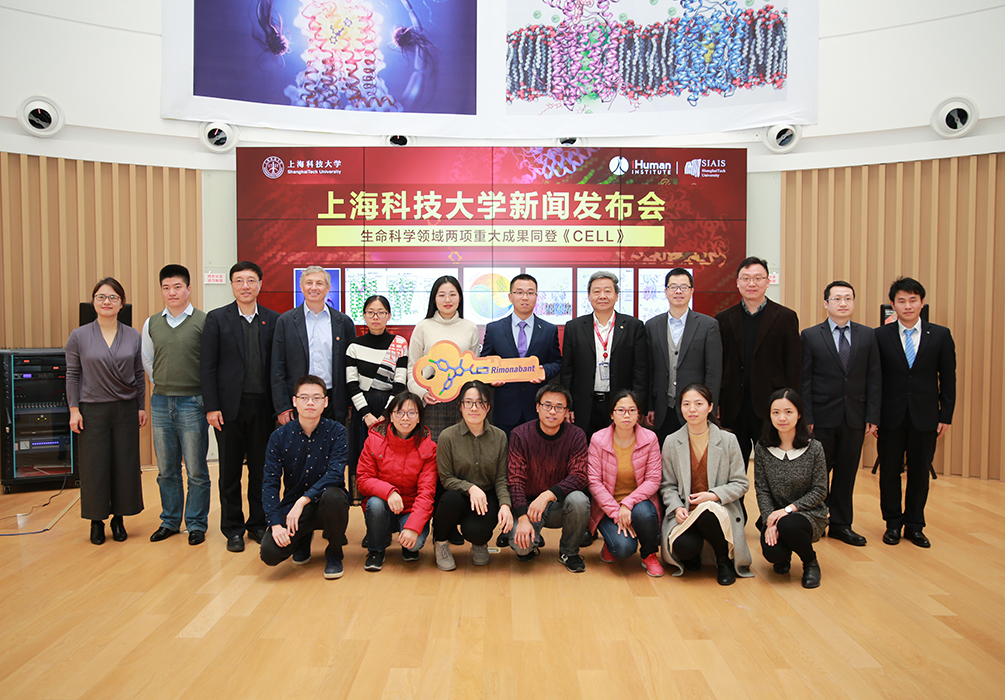 A team of scientists led by ShanghaiTech’s iHuman Institute has deciphered the crystal structure of human cannabinoid receptor CB2, another “marijuana receptor.” Their work reveals the structural features of antagonist-bound CB2 and the unique ligand binding mode, which facilitates rational drug design toward precise modulation of the endocannabinoid system. These new findings were published in the January issue of the prestigious journal Cell, titled “Crystal structure of the Human Cannabinoid Receptor CB2.”

Cannabis sativa L. has been had medicinal, religious and recreational uses for centuries, and there were a large number of records on the medicinal uses of cannabis in the traditional Chinese medical books such as "Shennong Herbal Classics" and "Compendium of Materia Medica." In recent years, the medicinal properties of cannabis have been more and more widely recognized and clinically applied; for example, in 2018 the European Union EMA and the United States FDA approved the new drug “Epidiolex,” with Cannabidiol (CBD) extracted from cannabis as the major active ingredient, to treat children’s epilepsy.

The cannabinoid receptors CB1 and CB2 serve as key components of the human endocannabinoid system and are the principal targets of phytocannabinoid ∆9-THC. CB1 is expressed throughout the body and is widely distributed in the central nervous system (CNS), while CB2 is mainly expressed in the immune system and, to a lesser extent, in the CNS. CB2 is emerging as an attractive therapeutic target for immunomodulation, the treatment of inflammatory and neuropathic pain, neuroinflammation, and neurodegenerative disorders. Recent studies indicate that CB2 antagonists can ameliorate renal fibrosis and also delay tumor progression, indicating their potential for treating fibrotic conditions and cancer. Although, CB2 has a high degree of homology and shares 44% sequence identity with CB1, there are many differences between them in receptor distribution and physiological function. “Determination of the structure of CB2, along with our previously solved CB1 structures (Cell, 2016; Nature, 2017), will provide new insights into precise modulation of the endocannabinoid system for therapeutic applications,” said corresponding author Liu Zhijie , Executive Director of iHuman Institute and School of Life Science and Technology professor at ShanghaiTech University.

“To generate the stable CB2 protein for structural determination, we designed and screened hundreds of constructs and optimized purification procedures,” said  Li Xiaoting, first author of the paper, and the first batch PhD students at ShanghaiTech University. With a great deal of effort and in collaboration with Alexandros Makriyannis’ lab at Northeastern University in the United States, the team finally solved the crystal structure of human CB2 in complex with a rationally designed antagonist, AM10257, at 2.8Å resolution.

“The CB2-AM10257 structure reveals a distinctly different binding pose compared with antagonist bound CB1.” said  Hua Tian, the co-first author of the paper and Research Associate Professor at iHuman Institute. The extracellular portion of the antagonist-bound CB2 shares a high degree of conformational similarity with the agonist-bound CB1, which led to the discovery of AM10257’s unexpected opposing functional profile of CB2 antagonism versus CB1 agonism. “CB2 antagonist and CB1 agonist profiles probably occur in certain compounds, representing a CB2 and CB1 yin-yang functional relationship. The physiological implications of such opposing activation profiles between CB1 and CB2 are worth exploring further,” said Liu Zhijie.

“It’s my great honor to grow up with Shanghaitech University together as one of the first batch of graduate students. My six-year study life at ShanghaiTech University has been both long and fast. Failures, dilemma and persistence made me stronger. I hope the structures of cannabinoid receptors will facilitate drugs discovery that targeting to cannabinoid system,” said Li Xiaoting.

“The endocannabinoids system is very important for the human body. It relates to many physiological and pathological processes. Such remarkable findings should aid in the rational design of CB1/CB2 ligands with improved functional selectivity,”said iHuman Institute Director Raymond Stevens. 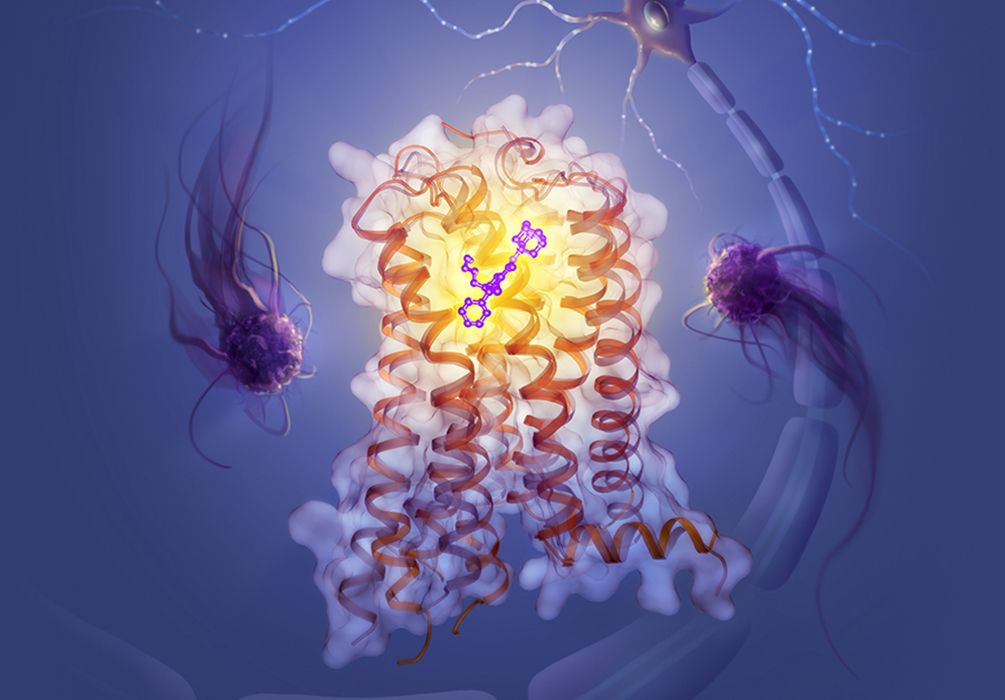 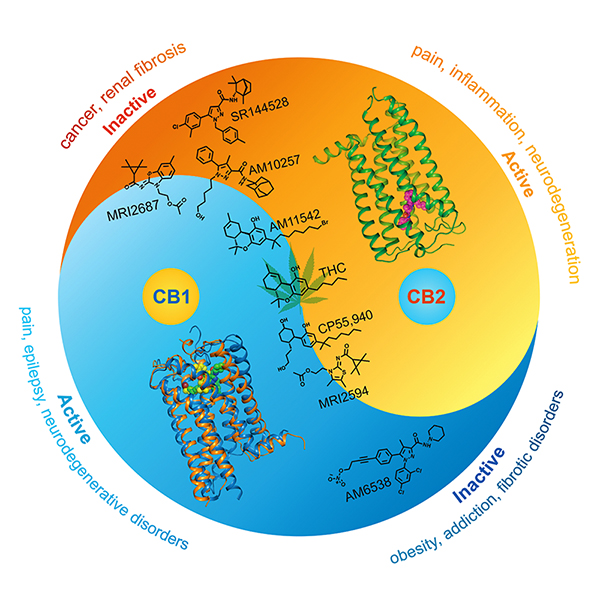 Figure 2 The effect of different ligands on CB1 and CB2 “yin-yang” functional relationship as well as respective related diseases. 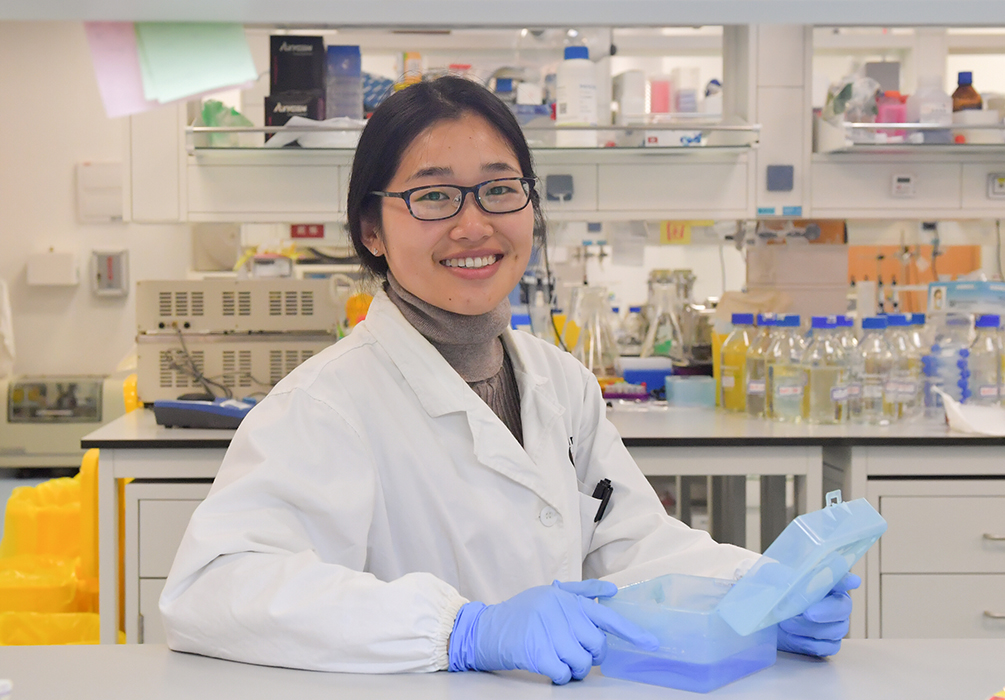 Figure 3 First author of paper,Li Xiaoting, one of the first batch of PhD students of ShanghaiTech University 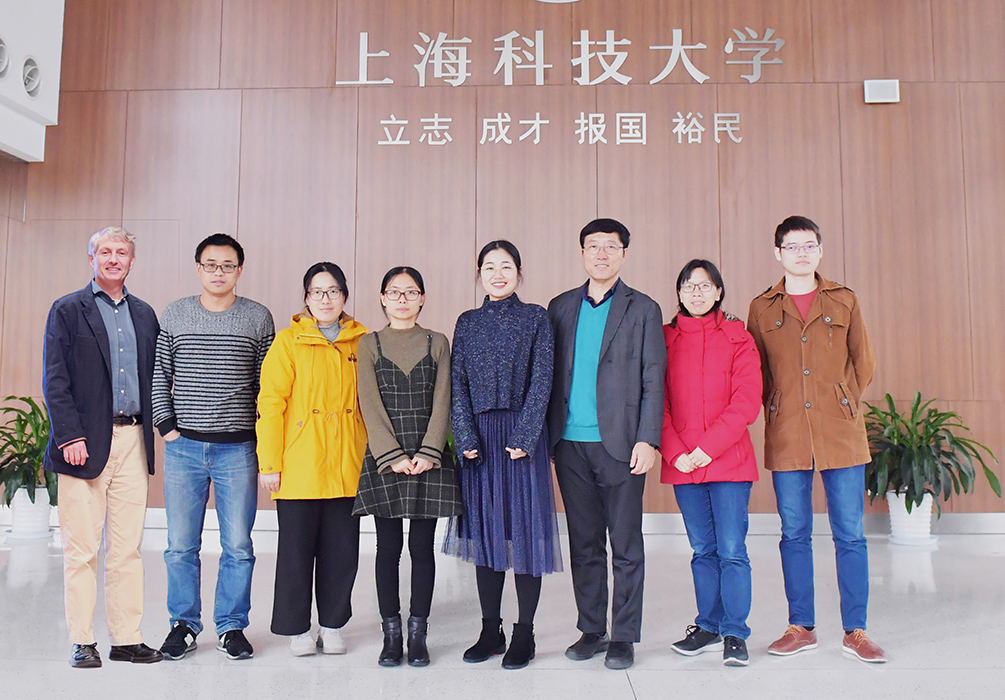 Meanwhile ShanghaiTech SIAIS Distinguished Adjunct Professor Rao Zihe's team published research in Cell with the title “The crystal structures of membrane transporter MmpL3, an anti-TB drug target.” MmpL3 has emerged as an important new target for anti-tuberculosis drug discovery with inhibitors of this protein currently in clinical trials. Their research determined the crystal structures of mycobacterial MmpL3 alone and in complex with four TB drug candidates. This data paves the way for the rational development of MmpL3 inhibitors as potent TB drugs.

Despite intensive efforts to discover highly effective treatments to eradicate tuberculosis (TB), the disease remains a major threat to global human health. In 2017 alone, there were an estimated 10 million new cases of TB leading to 1.3 million deaths, making it the leading cause of human fatality due to infectious disease (World Health Organization, 2018). Furthermore, the emergence of multi-drug-resistant, extensively drug-resistant and totally drug-resistant TB makes the disease exceptionally difficult to treat. Thus, there is an urgent need to develop new therapeutic drugs to target TB.

Mycobacterial genomes encode a membrane protein named MmpL3, which is deemed essential for the replication and viability of bacterial cells. MmpL3 belongs to the Resistance, Nodulation and Division (RND) protein superfamily, which are driven by the proton motive force (PMF). Particularly for Mycobacterium tuberculosis, MmpL3 is responsible for the translocation of the precursor of mycolic acids (a special chemical compound) from their production site in the cytoplasm to periplasmic space, where they can be further processed. Mycolic acids are key components of mycobacterial cell wall and essential for mycobacterial growth, rendering the bilayer impermeable to many antibiotics. Hence inactivation of the MmpL3 transporter inhibits the pivotal step of the synthetic pathway of the mycolic acids. Thus, it is an ideal target for developing novel anti-tubercular drugs. Although several compounds have been developed as MmpL3 inhibitors, its structural data for MmpL3 has remained elusive, preventing the development of more potent anti-tuberculosis drugs.

The research team solved the crystal structures of Mycobacterial MmpL3 alone and in complex with four TB drug candidates by X-ray diffraction method, achieving a major conceptual breakthrough in understanding how four important anti-TB drug candidates inhibit their target. Their initial breakthrough came when we were able to design a construct for MmpL3 which allowed, for the first time, the crystal structure of MmpL3 to be determined. More importantly, the crystal structures of the complex with SQ109, AU1235, ICA38 and rimonabant show precisely their modes of binging to proton-translocating channel in MmpL3, blocking the proton motive force for substrate translocation. SQ109 is a compound with much promise as an anti-TB drug, as it has recently been the subject of a Phase 2b-3 clinical study. Rimonabant is an inverse agonist for the cannabinoid receptor CB1 and was the first drug approved in that class. They identified it as a potential inhibitor based on virtual screening analysis of the solved structures. Importantly, these new structures will reshape the current thinking as to how to proceed to fully optimize these and other lead compounds as inhibitors of MmpL3. Then it is now possible to rationally design, using structure-based methods, more potent and selective anti-TB drug drugs by targeting MmpL3.

In addition, this is the first time to describe structures of drug candidates which can block the proton motive force to inhibit an RND family member, many of which are important targets for anti-bacterial drug discovery. This data will therefore provide inspiration for the design of new classes of antibiotics.

Professor Rao Zihe’s research team has long been committed to researching the structural biology of anti-TB drug target and drug development. Three months ago, they published a research article on the same topic in Science, titled “An electron transfer path connects subunits of a mycobacterial respiratory supercomplex.” Multiple institutions contributed to this research. SIAIS doctoral student Zhang Bing is the first author of this article. SIAIS Associate Professor Li Jun is the co-first author and co-corresponding author. Research Professor Haitao Yang and Professor Zihe Rao are the co-corresponding authors. SIAIS Professor Jiang Biao, iHuman Institute Professor Liu Zhijie and Shanghai Institute of Materia Medica of Chinese Academy of Sciences Professor Jiang Hualiang also contributed to this work. In addition, School of Life Science and Technology, the National Center for Protein Science (Shanghai), and Institute of Biochemistry and Cell Biology of Chinese Academy of Sciences provided technical support for this work. 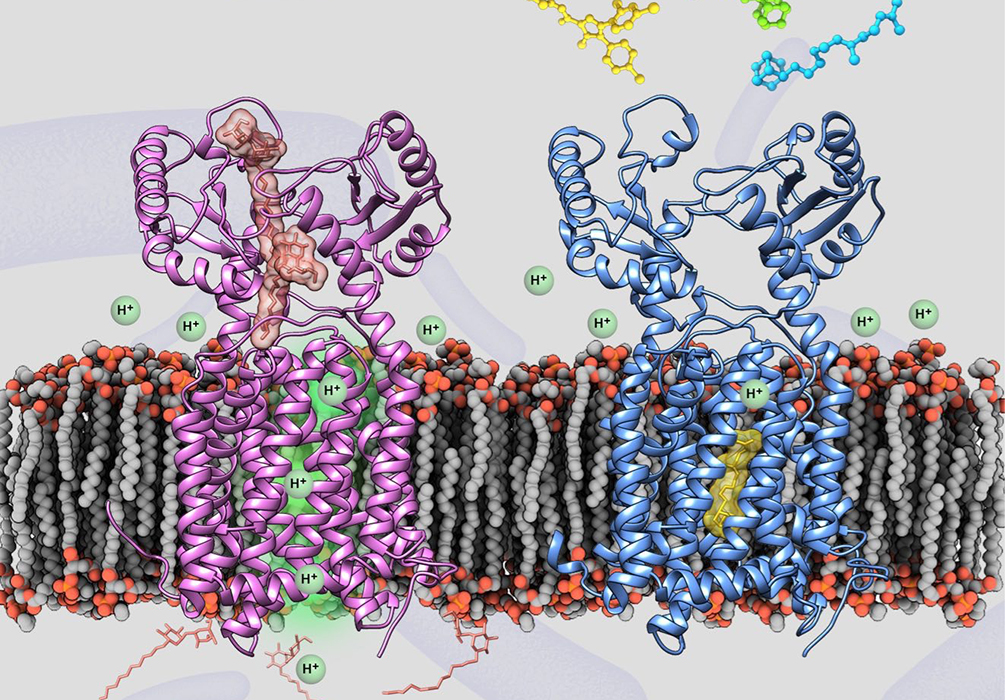 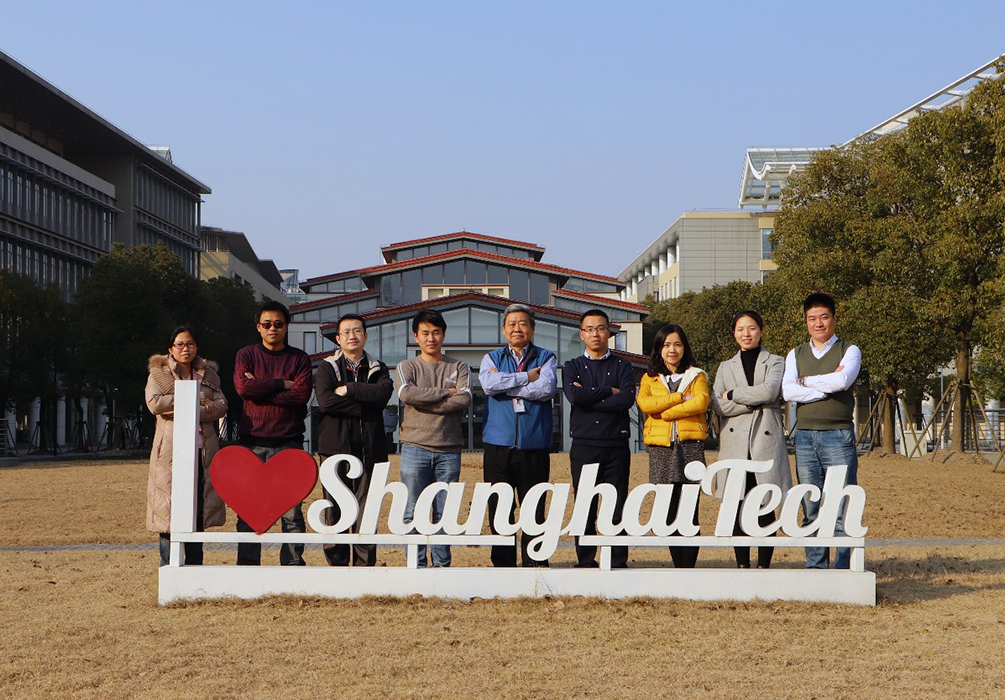 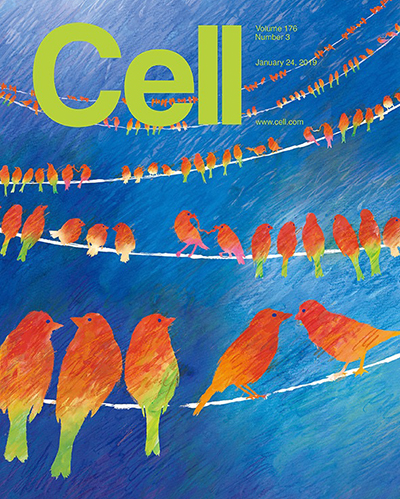