2016 saw an expedited expansion of the collaboration between ShanghaiTech University and University of Southern California’s School of Cinematic Arts, in non-degree professional training in screenwriting, directing and producing. By nurturing both the creative and managerial sides of the film industry, the program has demonstrated its ambition to foster a healthy ecology in the film industry that respects both creativity and industrial protocols.

As the Chinese film market continues to grow, blind spots and weaknesses have arisen. The box office of certain previously profitable genres has shrunk, smashing the illusion that such safe bets as romantic comedies and historical epics would always secure returns. Audiences’ developing tastes have been reflected in the box office curve. To this end, ShanghaiTech has collaborated with USC SCA to educate creative managers and creative talents, in order to produce more solid content in a diverse array of forms and styles.

Towards a Healthier Film Industry

The USC Film Production program is one of the most accomplished programs among US film schools and can offers antidotes to many of the issues arising in Chinese film industry.In its essence, aproducer is the driving force for a film to be made. This requires the producer to be competent in terms of finding compelling stories, putting together key crew and pushing the projects forward to getting made, and also to be knowledgeable in financing and distributing.

The producing workshop takes a structure of monthly gathering. Starting from April 6th, every month a lecturer presented a three-day lecture on a different aspect to the role of a producer. Among the 32 participants recruited, 50 percent are working producers and studio executives in the field, and 50 percent from investment background. In summer the producing class went to Los Angeles for a week's site visits and classes.

Over the course of the 10 months long program, the class had lectures on development, studio system, production cycles, editing, screenwriting, independent producing, co-production, among others. The lecturers invited have had different backgrounds and credentials, including Perfect Storm producer Gail Katz, Warner Brothers Production VP Chantal Nong, Tom Jacobson, former executive/President of 20th Century Fox and Paramount, and senior independent producer Brenda Goodman, among many others.

By introducing general frameworks and first-hand case studies, the instructors have demonstrated what defines a good producer with the vision, proper skills and sensibility. Through the lectures, the students got to know how PERFECT STORM was adapted from a book to a film with A-list stars, how Warner Brothers puts together the year’s slate of films consisting of both blockbusters and mid-budget genre films, the skills essential to independent players to negotiate for property rights or life rights for films, and effective patterns in screenwriting and editing that help producers to monitor the project execution. The participants praised the in-depth information and also practiced their producing skills in assignments such as preparing for pitches and breaking down scripts for production purposes.

The 2016 writing and directing workshops took place during the summer, in the form of 8-week intensive trainings. Like last year, the writing program started on June 17th and ended on August 8th. The weekly workshop took place every weekend, from Friday evening through Monday morning. The students had assignments on scene writing and ideation to developing step outlines for features. 13 writers from Beijing, Shanghai and Shenzhen were recruited, three fourths of whom had professional experiences in film and TV, and one quarter who had abundant writing experiences. Two weeks in, each participant pitched three ideas to the class, simulating a studio’s writers’ room, in order to select one idea that had the most potential to be developed into a feature.

The directing workshop, which started on June 19th and concluded on August 16th, covered skills in directing, casting, screenwriting, cinematography and editing. The first month of the workshop was at USC SCA in LA, and the second month was in Shanghai, where the participants made short films based on the scripts developed during the course in LA. The intensive directing class, in its first edition, recruited 14 Chinese directors from Beijing, Shanghai, and Guangzhou. One third of the group were active working professionals in video-production, commercials, film and TV. Throughout their four weeks in LA, each student had to do video assignments each week, from filming non-dialogue scenes to the remaking of an existing clip. Towards the second half of the program, each student’s short-film project went into production, and each had a complete film at the end.

Both workshops adopted an interactive pedagogy to bring out the best ideas from the creators, protect their integrity as storytellers, and push them to embrace uncertainties. The USC SCA faculty possessed a profound worldview and quick understanding of individuals from different backgrounds. In both workshops, the instructors would come in fully prepared, having read or viewed the assignments thoroughly, and offer precise and spot-on notes. The faculty did not enforce any of their thoughts on the students, but shared it with the trust that each could understand and learn from the experience they brought in, as well as be firm in their own choice and intuition. At the end of the program, each project turned out to be a solid story with a distinct voice.

Getting Practical in Universal Storytelling

After almost two years of trial and error, reflection and improvement, the ShanghaiTech-USC SCA collaboration has played an instrumental role in a streak of productive film projects. The 2015 participants have moved forward with their projects or launched their careers in Film and TV. BREAKING THE WAVES, one of the feature projects by Chi Zhang, was honored at the 2016 Shanghai International Film Festival as one of the 10 Projects of Excellence of the Young Directors’ Section of the Project Market. In 2016, the directing program partnered with SMG Pictures to provide production help and cash sponsorship for the participating directors. 14 short film ideas were submitted and 10 received cash rewards. The short films, now all finished, are to be distributed online soon and are being submitted to domestic and international film festivals.

It’s easy to be intrigued and perhaps skeptical of how “the Hollywood protocol” can be applied to “the Chinese way” of filmmaking. As many lecturers from USC have made clear from the very beginning, what they are here to offer the “How-To”, not theories or formulae. The step-by-step demonstration and interactive Q&As have dismantled the “magic” of filmmaking, and encourage professionalism and expertise, skills and judgement to take time and risks, in order to continuously discover diverse projects that could flourish.

Film in its essence generates emotional impact for the audience. In the writing class, the writers were encouraged to share their life experiences, as well as constructively critique each other’s work in terms of whether it generated the feeling that the writer wanted to convey. The idea that stories revolve around characters was also confirmed in the directing class, where the directors had to discern from scripts what the characters “want” to achieve in each scene. The producers too were advised to think as “storytellers” and be honest and articulate how they felt about the characters and the story. The participants learned that as storytellers you cannot presuppose that the others are different, but to believe that they fundamentally are able to understand. After all, filmmaking is no magic. It is simply about good stories, well told.

The 2017 ShanghaiTech-USC Producing Workshop opened call for applications in Jan 2017 and is closing the call on Feb 28th. The first class, which is scheduled on Mar 10-12th, will be taught by Tom Jacobson, formerly President of Worldwide Production at 20thCentury Fox and co-President of Paramount Pictures, on the production cycle of film production and the producer’s role.

To apply to the Producing Workshop , please visit: 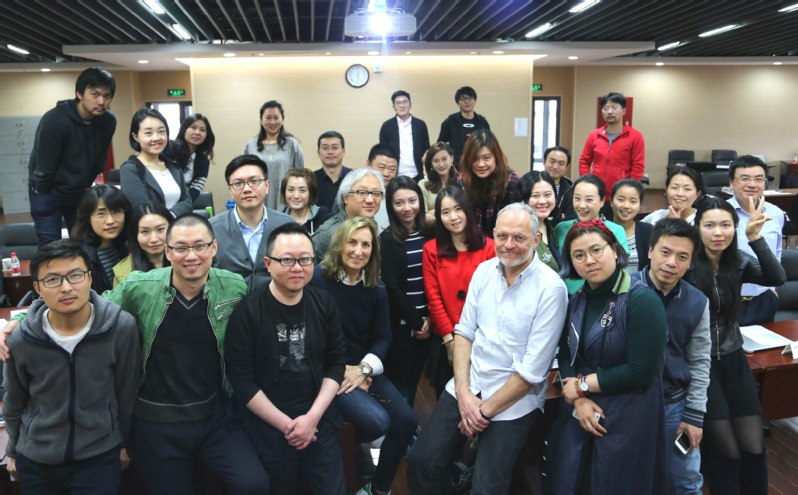 Gail Katz and Stephen Tolkin with the 2016 Producing Class 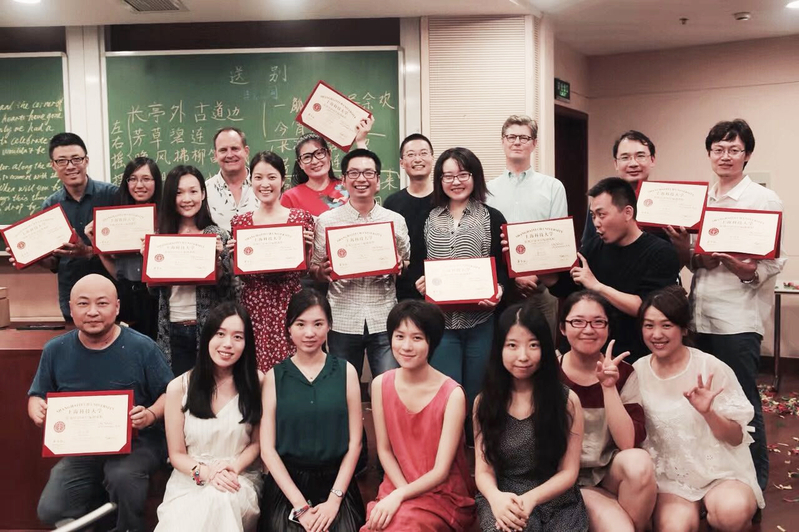 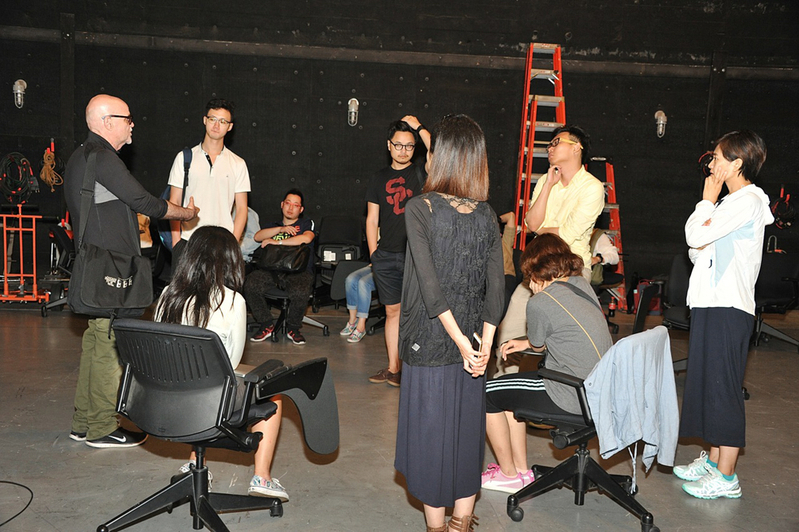 2016 Class of Directing at USC-SCA