Recently, Dr. Wei L. Shen’s group from ShanghaiTech University has published a research article in Proceedings of the National Academy of Sciences titled with “A hypothalamic circuit that controls body temperature.” They have elucidated a neural mechanism responsible for heat defensive behavior.

Thermal homeostasis is essential for survival in mammals. Significant deviation of body temperature (Tcore) will negatively affect cellular physiology and may result in death under extreme conditions. Also, thermoregulation has an impact on energy balance since we spent nearly half of our energy to maintain Tcore, whose interruption may increase the risk of obesity.

Thermal homeostasis is known to be regulated by central mechanism. When under a snow shower or a scorching sun, we feel the cold or hot and thus regulate our body temperature using behavioral mechanism, such as changing clothes, or getting close to heating or air conditioning. At the same time, our body uses a series of autonomic mechanisms, including changing in basal metabolic rates, brown fat thermogenesis levels, physical activity levels, and vasoconstriction,in an attempt to maintain near-optimal Tcore. This autonomic regulation of Tcore is known to be regulated in part by temperature-sensitive neurons in the hypothalamus. However, the specific neural pathways and corresponding neural populations have not been fully elucidated. In order to dissect the roles of the hypothalamus in thermoregulation, Dr. Shen's group studied many subregions in the hypothalamus using state-of-art techniques including optogenetics, fiber recording, and ribosome affinity purification, and has established a neural pathway involving two key hypothalamic regions to control Tcore.

They began by defining sites in which cFos staining was induced by changes in environmental temperature. They found induced expression in subsets of neurons within the ventral part of the lateral preoptic nucleus (vLPO) and the dorsal part of the dorsomedial hypothalamus (DMD). Activation of GABAergic neurons in the vLPO using optogenetics reduced Tcore, along with a decrease in physical activity. Optogenetic inhibition of these neurons resulted in fever-level hyperthermia. These GABAergic neurons project from the vLPO to the DMD and optogenetic stimulation of the nerve terminals in the DMD also reduced body temperature and activity. Electrophysiological recording revealed that the vLPO GABAergic neurons suppressed neural activity in DMD neurons, and fiber photometry of calcium transients revealed that DMD neurons were activated by cold. Accordingly, activation of DMD neurons using DREADDs or optogenetics increased Tcore with a strong increase in calories burning and physical activity. Finally, optogenetic inhibition of DMD neurons triggered hypothermia, similar to stimulation of the GABAergic neurons in the vLPO. Thus, vLPO GABAergic neurons suppressed the thermogenic effect of DMD neurons. In aggregate, they identified novel vLPO→DMD neural pathways that reduce Tcore in response to a heat challenge, and they showed that outputs from the DMD can induce activity-induced thermogenesis.

Furthermore, Dr. Shen’s group also made efforts to find more specific genetic markers for thermoregulatory neurons because it will help further understanding these critical neural circuits. Using the novel PhosphoTRAP approach, which enables the immunoprecipitation of translational ribosomes via phosphorylated ribosomal protein S6 (a marker of neural activity), they discovered that brain-derived neurotrophic factor (BDNF), a classic neurotrophic factor, is transcriptionally activated following heat challenge and is a novel marker for heat-activated neurons. BDNF defines a new type of thermoregulatory neurons since BDNF has a high percentage (>60%) of overlapping with heat-induced cFos activation. Taken together, their work may shed light on the mechanism under fever and heat stroke and may also contribute to the understanding of the regulation of brown fat thermogenesis. 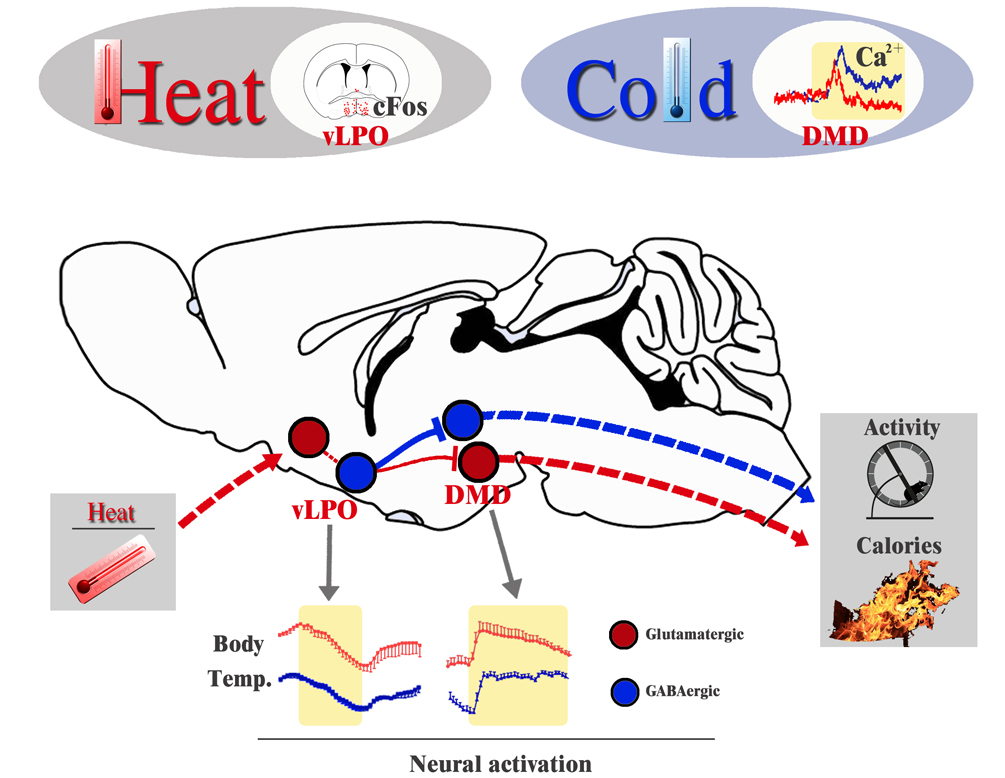 This work was carried out by Dr. Wei L. Shen’s group in School of Life Science and Techology, ShanghaiTech University. Zhengdong Zhao and Wen Yangwere co-first authors. Part of the work was done by collaboration with Dr. Xiaohong Xu’s group from the Institute of Neuroscience, Chinese Academy of Sciences. This work was funded by ShanghaiTech University start-up fund (W. Shen). The link for this story is:

Dr. Shen’s group is focusing on the central control the metabolism related behaviors including thermoregulation, feeding and fat metabolism. For application of postdoc and technician positions, please visit:  http://www.shanghaitech.edu.cn/eng/faculty/slst/people/200.html