The taste sensory system is responsible for examining food nutrition and avoiding ingestion of harmful substances. In humans, the tastants evoke five distinct taste sensations: sweet, bitter, salty, sour and umami. Interestingly, ion channels transduce the sour and salty signals, whereas, sweet, umami and bitter taste are mediated by G protein-coupled receptors (GPCRs). Among the five taste modalities, the bitter taste perception plays a vital role in protecting mammals from ingesting harmful substances, and there are 25 bitter taste receptors which are also known as type 2 taste receptors (T2S2Rs) or class T GPCRs. However, little is known about how T2S2Rs recognize diverse bitter compounds, the molecular basis of activation and signaling.

In the study, the researchers revealed several unique features of TAS2R46, including distinct receptor structures that compare with known GPCRs, a new “toggle switch”, activation-related motifs, and precoupling of mini-G protein gustducin. At the same time, the team also revealed the binding mode of strychnine in TAS2R46. Strychnine is a toxic bitter alkaloid extracted from the seeds of Strychnos nux-vomica and is used as an herb in traditional Chinese medicine to treat dyspepsia and pain. 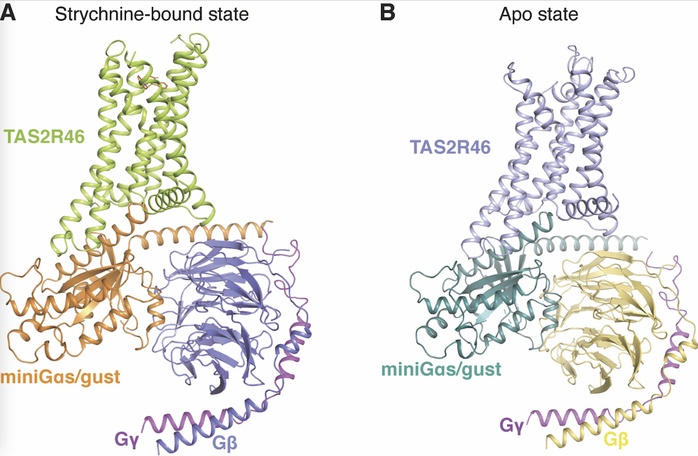 By comparing the conformational changes between apo and strychnine-bound structures, the researchers found the extracellular part of TAS2R46 is dynamic while the intracellular part is more static. Additionally, a new toggle switch residue Y2416.48T was identified for TAS2R46 activation. These features suggest the possible diverse ligand-recognition and activation process of TAS2R46.

“The 3D structures provide the basis for further exploration of other bitter taste receptors and their therapeutic applications,” said Prof. Liu Zhi-Jie, one of the two corresponding authors, and the Executive Director of iHuman.

“More importantly, bitter taste receptors display low sequence identity (<20%) with other GPCRs and are classified as a separate class T GPCR subfamily, which is the last structureless class of GPCRs. This study provides insights into the molecular features of class T GPCRs and improves our knowledge about the GPCR family,” said Prof. Hua Tian, the other corresponding author. “I hope our study will also help people understand the biology behind bitter taste perception and signaling.”

SLST Ph.D. candidate Xu Weixiu is the first author of the paper. The corresponding authors are professors Liu Zhi-Jie and Hua Tian. It is worth noting that Prof. Liu and his team have been focusing on the structural and mechanistic studies of disease-relevant GPCRs in the past years and this article is the eighth paper with high impact.