With the support of National Key Research Program, Assistant Professor Ning Zhijun and collaborators have gained great progress in high stability and high efficiency perovskite solar cells by introducing the secondary amine into perovskite structure: the certificated efficiency of NiOx-based inverted structure perovskite solar cells up to 20.8%, and the device maintains over 80% of its original efficiency after 800 hours operational under continuous light illumination. Recently, their research findings were published in Advanced Materials in the article “Efficient and Stable Inverted Perovskite Solar Cells Incorporating Secondary Amines,” and was selected as a cover image.

Researchers then investigated the impact of structure rigidity on the defects formation. The DFT results demonstrate that the introduction of dimethylamine molecule increased the formation energy of defects, which contributes to the good stability of perovskite. They reported the 21.6% in lab and certified efficiency of 20.8%, which is the highest reported certified efficiency for the NiOx-based inverted perovskite solar cells, and the encapsulated devices maintain over 80% of their efficiency following 800 hours of operation at the maximum power point. This work verified that the structure rigidity has great effect on the performance of perovskite solar cells, which provide an effective method for the development of high efficiency and high stability perovskite solar cells. 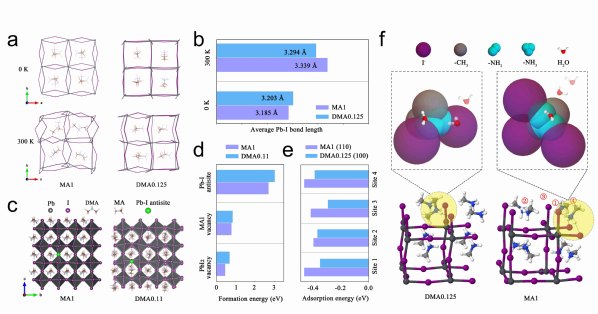 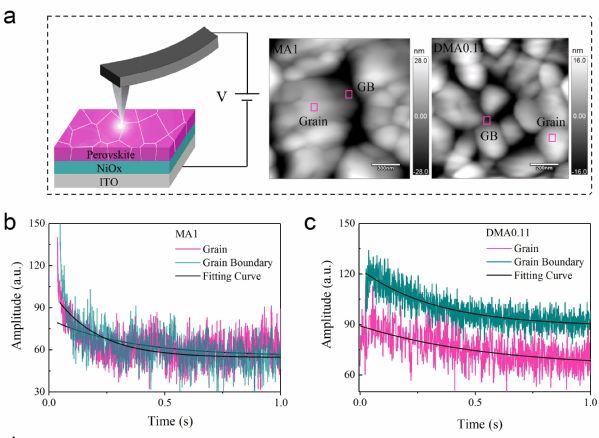 Figure 2. Investigation of ion diffusion in perovskite films. (a) The graphic illustration of electrochemical strain microscopy (ESM). (b-c) The experimental ESM amplitude of grain (a) and grain boundary (b) versus time for MA1 and DMA0.11 measured on ITO/NiOx/perovskite under −2 V bias, the time of the x-axis is a reference time.