The competition and interaction of different entangled degrees of freedom can generate many interesting phenomena, one of the most active research topics in contemporary condensed matter physics. Recently, the research groups of Assistant Professors Li Gang, Liu Zhongkai, and Guo Yanfeng studied the low-dimensional ferromagnetic system CrSiTe3 and successfully revealed the important role played by electronic correlations, pointing out that the charge gap in this system is mainly due to the Coulomb repulsion between electrons. Their work, "Unveiling Electronic Correlation and the Ferromagnetic Superexchange Mechanism in the van der Waals Crystal CrSiTe3" was recently published at Physical Review Letters.

To understand the competition and interplay between electronic and magnetic correlations in CrSiTe3, the group of Assistant Professor Guo Yanfeng firstly prepared a high-quality single crystal. The electronic dispersion was subsequently measured by the group of Assistant Professor Liu Zhongkai with angular resolution photoelectron spectroscopy. Experiments confirmed that the system has a ferromagnetic long-range order at low temperatures (< 33K). Surprisingly, the system still maintains the insulating phase above the Curie temperature. Compared to the low-temperature case, the measured charge gap at high temperature is not induced by the ferromagnetic long-range order, and its origin needs to be understood. By combining first principles and quantum many-body methods, Assistant Professor Li Gang’s group discovered that this high-temperature electronic gap can be solely explained by electron-electron correlations. The local structure of the material splits the d-orbital whose orbitals are half-filled at the Fermi level. The narrow bandwidth of d-orbital strongly enhances the correlations between electrons.

As a result, CrSiTe3 satisfies both conditions necessary for the Mott transition. The researchers found that the metal-insulator phase transition occurs under electron correlation (as shown in the left panel of Figure 1), under which the d-electron band near the Fermi surface is split into upper and lower Hubbard bands with the latter being further pushed below the Te-p orbit. The Te-p orbit subjects to a strong spin-orbit coupling, such that when both the electronic correlation and the spin-orbit interaction are considered, the calculated electronic energy band highly resembles the electronic energy spectrum measured in the angular resolution photoelectron spectroscopy (see the right panel in Figure 1).

This work successfully reveals the very important but unfortunately overlooked role played by the electronic correlations in CrSiTe3, which greatly enriches our understanding of low-dimensional magnetic systems and provides a microscopic mechanism for experimental engineering.

The two first-authors, Zhang Jiaxin and Cai Xiaochan, are undergraduate students in the School of Physical Science and Technology. Assistant Professors Li Gang, Liu Zhongkai and Guo Yanfeng are the corresponding authors. This work is supported under the National Key R&D program of China (Grant No. 2017YFA0305400) and Chinese Academy of Science-Shanghai Science Research Center (Grant No. CAS-SSRC-YH-2015-01). G. L., Z. L., and Y. G. acknowledge the starting grant of ShanghaiTech University. Y. G. and G. L. acknowledge the Program for Professor of Special Appointment (Shanghai Eastern Scholar). Z. L. and G. L. acknowledge the support from the National Natural Science Foundation of China (Grants No. 11674229 and No. 11874263). Calculations were carried out at the HPC Platform of ShanghaiTech University Library and Information Services, as well as School of Physical Science and Technology. ARPES measurements at DLS were under the Proposal No. SI18382. The authors greatly thank the Instrument Analysis Center of ShanghaiTech University. Read more at：https://journals.aps.org/prl/abstract/10.1103/PhysRevLett.123.047203 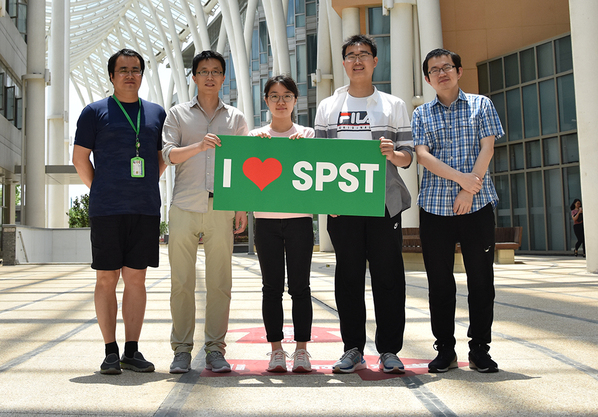