The Story Behind the Images

When that newest issue of Cell arrives, or you're checking out the latest articles in Nature, have you ever stopped to think about where the cover images and accompanying illustration come from? With their support, ShanghaiTech scientists’ groundbreaking research can jump from the page in full color and excite the reader.

Julie Liu, an illustrator who joined ShanghaiTech as a scientific visualization engineer less than a year ago, uses her talents in the visual mediums of illustration to convey biological information. As the only scientific illustrator on staff, Liu runs the Innovation is Beautiful Studio in a corner of the School of Creativity and Art, and is responsible for a good many of the illustrations that accompany ShanghaiTech scientists’ published research.

Liu studied Scientific Illustration at The University of Georgia and Medical Illustration at Augusta University before arriving at ShanghaiTech. Born here but having spent most of her life in the U.S., Liu was excited about the possibility of returning to China and working at a young university. 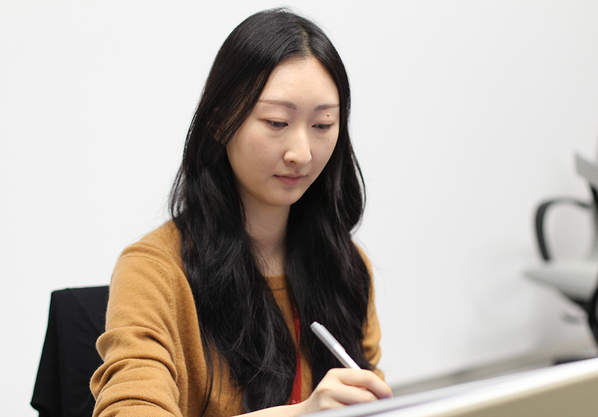 How did you end up in this field?

In college, I majored in scientific illustration. I had two professors who taught me about science illustration. I think their background was in medical illustration and veterinary illustration, so I was looking toward that path, because I think I didn't know [what my options were]. Later I changed my path.

Do you remember your first illustration at ShanghaiTech?

Yes, it was an illustration for Professor Xu Fei from iHuman Institute. She asked me if I could make a cover for her a Nature journal cover about her Frizzled 4 receptor protein that relates to the development of the eyeball’s retina. 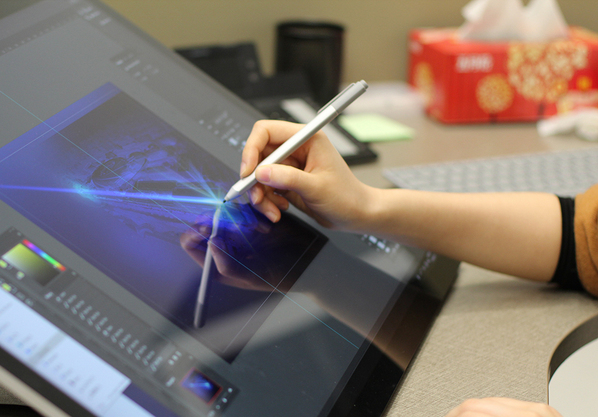 She sent me her figures of the proteins and also her ideas for the cover: she wanted an eyeball featured on the cover. We talked about more ideas for how we want to connect the eyeball with her receptor protein. First up, I like to sketch out some very quick thumbnails sketches, maybe about ten to twenty ideas. I would show them to the professor and she would pick her top two or three favorites. And for each idea, I like to try different compositions. I do try to read through the manuscript, but I do not understand everything. I think the guidance [from the researcher] is very helpful, especially if they have a clear idea of what they want to represent on their cover and how can we convince the public audience to get interested in the research. I think she and her research team, they chose one or two favorites. And after that, I would start working on the second or third draft adding more details, the shadows, highlights, and also some  color ideas.

Wow, you give them so many options.

After she chose the color, I would add that to the final draft. She also sent me more protein structures to add into the figure. It’s pretty flexible if I'm working on Adobe Photoshop. I can just make different layers and rearrange them.

What kind of input do the researchers usually have?

Often times they have a clear idea. For example, Professor Li Zhi from School of Physical Science and Technology had an idea to represent the chemical catalysis, the fast chemical reactions, through the metro system or the high-speed train network. I thought, well that's such a great idea. We talked face to face and as he was sketching, he labeled each part. 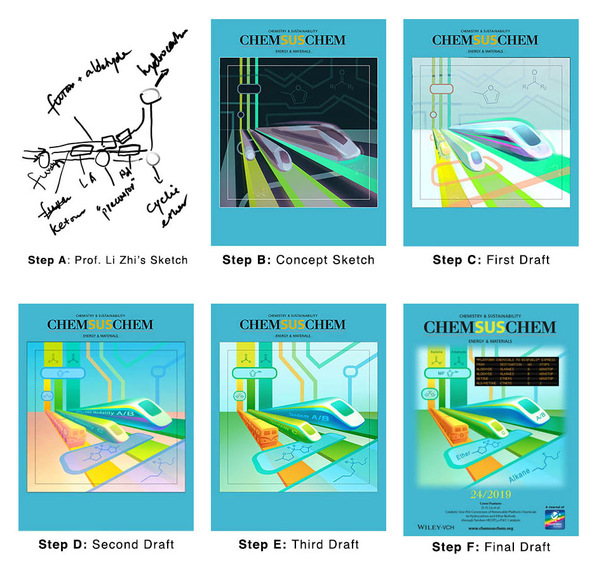 Ideally, they would contact me as soon as possible, as soon as they hear their manuscript has accepted by the journal. They could give me three weeks total to work on this image. The professors, they might not prioritize the image, so I will need to adapt my style to meet their needs.

How long do you spend per image?

I dedicated around five to six hours on the image each day. I wouldn't spend ten hours on average each day, because I realize if I stare at a picture so long, I wouldn't recognize all the mistakes I made. I will try to focus on two to three projects each day.

I think starting out, I have to say yes to as many people as possible, right? To spread the news that I am here to help researchers. My goal is to make ten to twenty images each year, and perhaps one or two images each month.

What’s the fastest turnaround time you had?

I heard from a professor from the School of Life Science and Technology that a manuscript was accepted by Cancer Cell and they needed a cover image, due in two days. I tried my best. I tried to reduce the amount of details and also work with a different software, Adobe Illustrator, where I could just create vector graphics. I tried to get it done within one day and send this to the researcher for any feedback. It was too late to make the major revisions due to the tight deadline.

Where do you get inspiration from?

I like to look at the other journal covers. Science and Nature and Cell have archives of all the covers on their websites, and so I like to look through them and see all of the artists or photographers who made their designs and then check out their websites.

What is your favorite illustration that you worked on?

Professor Zhong Chao from School of Material Science and Technology asked me to make a cover for his research on underwater adhesive fibrous coatings. His idea was to show the adhesion of two substrates, where the upper surface is coated by nanofibers and the lower surface is coated by protein droplets. I spent one month on it.  This one required two revision stages, I think we went through three drafts. I don't think I was working on other images at the time, so I could focus on this one.

What’s the hardest part of your job?

Thinking of ideas for how to present the research to different audiences. The researchers- they understand what they're talking about- but to present all of their information to others [is hard].

What advice would you give to researchers who are working with an illustrator?

I would encourage them to sketch or doodle. I think it's more helpful than words because I think that that's the first step to visualize their research.