On August 29th, 2019, a study led by a collaboration between ShanghaiTech Adjunct Professor Rao Zihe and SLST Adjunct Professor and CAS Institute of Biophysics Hu Junjie’s group was published online in Nature Communications. In the research article, “Mycobacterial dynamin-like protein IniA mediates membrane fission,” they reported the crystal structure of IniA, an isoniazid inducible protein, which folds like a bacterial dynamin-like protein and mediates membrane fission. This work revealed a novel mechanism of IniA-mediated drug resistance, which has important guiding significance for solving the drug resistance problem of tuberculosis (TB).

Tuberculosis is a fatal infectious disease caused by Mycobacterium tuberculosis (Mtb) which humans have been fighting for more than 150 years. Since the development of anti-TB drugs such as streptomycin, pyrazinamide, isoniazid, ethambutol and rifampicin in the middle of last century, the threat of tuberculosis has finally been able to be controlled. However, one-third of the world’s population is infected with Mtb, with large numbers of new cases and deaths annually. More seriously, drug-resistant TB has emerged during drug usage for the past fifty years and some cases are hard to cure. Therefore, it is particularly urgent to find ways to solve the drug resistance problem.

IniA is an important isoniazid inducible protein in Mycobacteria, relating to the drug resistance of isoniazid and ethambutol. But its structure, function and mechanism for drug resistance remain to be illustrated. In this study, the researchers solved the crystal structures of Mycobacterium smegmatis IniA in the apo and GTP bound states. The structures reveal that IniA folds as a bacterial dynamin-like protein (BDLP) with a canonical GTPase domain followed by two helix-bundles (HBs), named Neck and Trunk. The distal end of its Trunk domain exists as a lipid-interacting (LI) loop, which binds to negatively charged lipids for membrane attachment. IniA does not form detectable nucleotide-dependent dimers in solution. However, lipid tethering indicates nucleotide-independent association of IniA on the membrane. Further biochemical experiments show that IniA deforms membranes and exhibits GTP-hydrolyzing dependent membrane fission. The molecular activity of BDLP family has been controversial for a long time, because of its similarity with Mitofusion in mitochrondria on structure folding and phylogeny, the BDLPs have been thought to mediate membrane fusion. This work now clearly elucidates the ability of BDLP in membrane fission rather than fusion.

Although progress has been made in structural studies of BDLPs, their physiological functions have still puzzled researchers. Isoniazid and ethambutol are known to inhibit mycobacterial cell wall synthesis; the plasma membrane will lose protection of cell wall and become unstable and easily wounded when the pathogen is exposed under the drug. This work finally confirmed that IniA plays a role in cell membrane repair by attaching to membrane and mediating fission in the compromised areas (possibly endocytosis), thus contributing to the maintenance of plasma membrane integrity and increasing the viability of the pathogen under the stress of antibiotics. These findings are the first to unveil the mystery of IniA protein and provides new clues for solving the drug resistance problem of tuberculosis.

Professor Rao Zihe’s group has long been committed to the structural biology study of pathogens of new and recurrent infectious diseases in China. This paper is another important research achievement for his group in the field of anti-tuberculosis. ShanghaiTech University PhD student Wang Manfu and Nankai University PhD graduate Guo Xiangyang are the co-first authors of this article. SIAIS Research Associate Professor Li Jun and Institute of Biophysics Professor Hu Junjie are the co-corresponding authors. SIAIS Research Associate Professor Yang Xiuna and SIAIS Research Associate Professor Zhang Bing also contributed to this work. ShanghaiTech University is the first affiliated institution. This work was supported by grants from the Strategic Priority Research Program of the Chinese Academy of Sciences, the National Key Research and Development Program, the State Key Development Program for Basic Research of the Ministry of Science and Technology of China (973 project), National Natural Science Foundation and the Strategic Priority Research Program (Pilot study) of the Chinese Academy of Sciences. 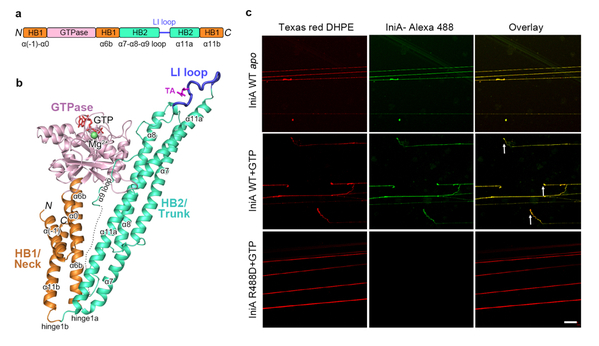 (a) Scheme showing the domains of IniA. (b) Overall structure of IniA. (c) SMrTs assay showing fission activity of IniA.